WINNING FORMULA: How to prepare your game for tournament golf 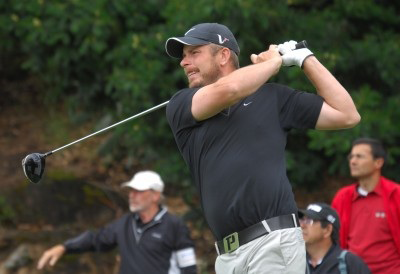 It’s safe to say that when PGA Tour pros tee it up in major championships they put in more preparation time than they do for most other stops on the schedule. Whether it’s a mental or physical adjustment, their focus is on preparing themselves to play the best round possible during trying conditions on courses laid out to test their abilities to the highest degree.

In a way, your club tournament or a member-guest event or some other type of competitive round where the rules are enforced is like your major championship. Since most of your rounds are likely friendly and casual, stepping up to the first tee at such an event might be a step out of your comfort zone. If the heat of competition causes you to wilt, there are some strategies and game plans to keep in mind that can help.

Preparation for a competitive round starts weeks before the tournament by eating right, getting rest, drinking plenty of water and envisioning a great tee shot on the opening hole. You also should play a few practice rounds to establish a game plan for the course, such as:

• Play from the tees that will be used so you know when and when not to hit a driver to avoid certain hazards.

• Practice chipping and pitching to get a feel for the greens. Make note of the putting surface’s false fronts, slopes and speed.

• Plan which clubs to carry in your bag that week.

• Hit shots out of the greenside bunkers to get a feel for the sand.

Most golfers play a round with only a score in mind. By doing that, however, you’ll miss the course’s nuances and subtleties. My practice-round process starts with hitting a club off the tee that gets me in the best position in the fairway to have a good approach shot to the green. I also don’t hit all approaches toward that day’s pin, instead focusing on where the pin is likely to be during the tournament. The same goes for putts, and I might also hit some chips to areas of the greens where the pins could be to get a feel for how the surface reacts to certain chips. With this type of practice round I formulate a game plan on how to best play each hole and I stick to that plan for the tournament unless weather conditions dictate that I alter the approach.

Golf isn’t about the prettiest swing, drills or swing thoughts. It’s about competition, and preparation is a big part of that mind-set. Put yourself in tournament situations during practice by playing the last nine holes of a round as if you need to play well to make the cut. The goal of a practice round is to be comfortable on the course, so do everything you can to get comfortable. Spend time getting used to chipping off the turf, feeling the sand and putting in all directions. Practice rounds are not for finding your swing through repetition and drills. Remember your goal is to play well in the tournament, so it does you no good to shoot your personal best before the event. In fact, if you’re lighting it up on the front nine during a practice round my advice is to quit!

I’m constantly working with the tour pros I teach on creating a plan for tournament week and committing to the routines that were planned. This way there are no surprises whether they’re in the lead on Sunday or struggling to make the cut. The routines stay the same to give them comfort and confidence. I see amateurs change their routines when it comes to playing competitive golf. They get to the course earlier, hit more balls, practice putting for longer and generally freeze themselves by thinking about the game too long. When you practice leading up to the event, practice in the same way you intend to play on the day of competition. Use the same routines, warm up for the same amount of time and practice the same shots you plan to use during the tournament.

It’s important for a player’s game to peak at the right time. Trying to overhaul or make a big swing change to your golf game before a tournament is never a good idea. My goal is to have my students feeling a positive motion that will build confidence and spill over into the tournament atmosphere. There are a few key areas for a player to be focused on, such as a solid and well-rehearsed pre-shot routine, a comfortable swing motion and an understanding of the golf course. Making a mechanical golf swing should be the last thing on the player’s mind. Players who compete well in tournaments are the ones who understand that the quality of their practice time is a big factor in how many trophies are in the case.

I think there’s a progression that needs to take place prior to playing in tournaments. First, repetition gets the mechanics dialed in; the second is working on your shot routine; and the third is to practice playing as many holes as possible and work on your scoring.  Even with this practice you’re going to be stressed, however, but everybody has those feelings. So accept it and move forward. That’s why you’re playing in this event. Remember it’s not life or death and the experience will only make you better. The bottom line is to prepare before the tournament and to take deep breaths and have positive thoughts during the competition.

GO FOR THE GOAL

The best way to prepare for a competitive golf tournament is the same way a concert pianist prepares for a show: rehearsal. In the weeks leading up to your next tournament each shot you hit on the practice tee or the practice green should be a rehearsal for the real thing. If possible, give yourself a dress rehearsal the day before. Play nine holes and put yourself in a tournament setting. Set a goal and something to play for like a nice dinner if you make three or more birdies or have less than 15 putts. Proper rehearsal will give you more confidence for when the curtain goes up on tournament day.

In getting ready to play in competition, try to keep things in perspective. There are many good golfers who struggle playing in tournaments for various reasons. Is it the players you’re playing with, the field or the course? Since you can’t affect what others are doing, make your opponent the golf course. If you’re trying to shoot a certain score, you’ll likely start trying too hard as the number gets away from you. Lastly, trying to win a tournament gets you to think too far ahead and lose focus on playing one shot at a time. The antidote for keeping these thoughts under control and staying focused is to stay in the process on each shot. Commit to a specific target and play to it. The process doesn’t allow the “what ifs” or unnecessary swing thoughts to creep into your head.