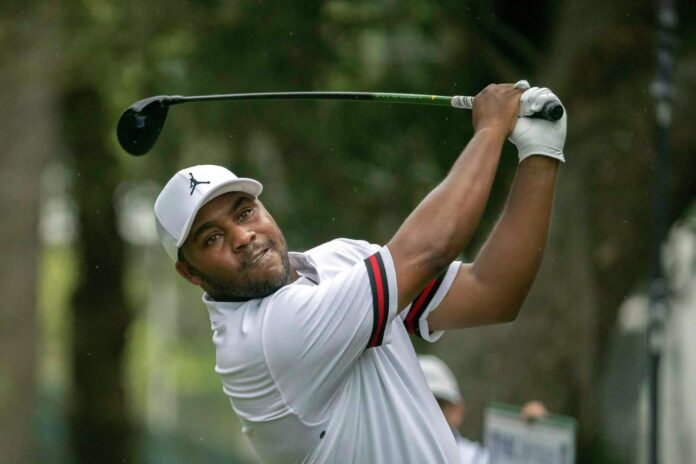 Harold Varner III has never won on the PGA Tour, but will have another opportunity to change that on Sunday.

“Having a clean card is what I was looking for today and I was able to do that,” said Varner, whose two pro victories came in the 2015 Australia PGA Championship and the Saudi International in February with a 92-foot eagle putt on the last hole. “I made a lot of good shots and several birdie putts, just executed really well. The greens are a little slower, so you don’t have to worry about the blowing the ball way past the hole.

“Every tee shot on this course is super uncomfortable, especially when it’s windy, and I’ve hit it out of bounds everywhere here. Last year, first hole, I hit it out of bounds. It’s just hard off the tee. Sometimes I feel like I’m always kind of guiding it out there, but if you can guide it out there for 72 holes, you can do some damage.

“I’ve won in Australia, I’ve won somewhere else that I can’t speak of. I mean, it just proves that I can win, and I just want to do it here.”

Varner, whose best result on the PGA Tour was a tie for second last season in the RBC Heritage below the Harbour Town Lighthouse on the shores of Calibogue Sound, reeled off five birdies on the front nine and added three coming home to record a 54-hole score of 11-under 202.

Cantlay, the reigning FedEx Cup champion who led by two strokes after round two, sank a five-foot birdie putt on the last hole to salvage a 70, while Lowry, the 2019 Open champion, collected four birdies on the back nine in a 65, and Van Rooyen carded a bogey-free 67.

“I didn’t play as well as I have the first two days, but it was nice to make a birdie on the last hole and that might give me some momentum heading into tomorrow,” said Cantlay, whose sixth PGA Tour victory came in the Tour Championship last September.

“If you get out of position on this golf course, it’s hard to get back into position. But all-in-all, it wasn’t too bad today considering I didn’t have my best stuff. I just want to get off to a good start on the first five holes tomorrow and go from there.”

Matt Kuchar, won captured the 2014 RBC Heritage for one of his nine PGA Tour victories, bounced back from an early bogey with four birdies while playing flawlessly the rest of the way in a 67 and is two shots back in a tie for fifth with Hudson Swafford, who shot 66, Sepp Straka of Austria, who finished at 67, and Aaron Wise of Lake Elsinore, who wound up at 68.

Jordan Spieth chipped in from 22 feet for an eagle on the 15th hole, but missed a tap-in par on the last hole to shoot 68 and is three behind in a tie for ninth with Tommy Fleetwood of England, who put up a bogey-free 64, Billy Horschel, who had a bogey-free 67, and Joel Dahmen, who came in at 69.

Second-ranked Collin Morikawa of La Canada Flintridge is tied for 38th after a 69, eighth-ranked Justin Thomas totaled 70 and is tied for 56th, while Stewart Cink, the defending champion and three-time RBC winner, shot 71 and is solo 66th.