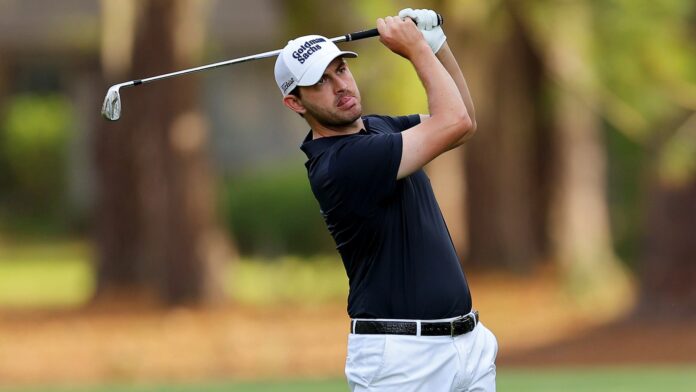 Sixth-ranked Patrick Cantlay seemed to ride the wind while others struggled with it.

“Obviously, that’s a dream finish,” said Cantlay, from Los Alamitos and UCLA. “I finally rolled in some putts and that was really nice to see going into the weekend. This is a very old school course and I’m really happy with the way I played it today. It was tricky, but I hit some really great shots and putts.

“It was a crazy out there today with the wind. The wind gusts were blowing some balls offline that looked like they were going in the hole and you had to account for that. I’m just staying with my game plan and continue to leave the golf ball in the right spots, which is paramount around this place. I think that is the key.”

Cantlay, who has finished in the top 10 four times this season after claiming four of his six PGA Tour victories last season including the Tour Championship, made putts of 13, 10, eight and 21 feet in his hot finish heading toward the Harbour Town Lighthouse behind the final green and posted a 36-hole score of 9-under 133.

“Things were pretty tough, but it was a really good round around here,” said Streb, who won the RSM Classic last season. “Obviously haven’t played fantastic around this place, so getting it around in the wind was really good for me.

“It’s kind of one of those things, you catch a bad gust here or there, you can end up in a pretty bad spot without hitting a bad ball. It felt like I kind of got lucky. I got most of the time the wind I was hoping for and made some putts.

“I felt like I was just kind of doing my best to flight it and keep it in front of me. Gave myself some looks, which sometimes can be tough around here with the small greens and the wind.”

Cameron Tringale of Mission Viejo posted another 67 and is three shots back in a tie for third with Aaron Wise of Lake Elsinore, who had his second 68, Erik van Rooyen of South Africa and Joel Dahmen, who both totaled 67, and first-round leader Cameron Young, who struggled to a 73.

Matt Kuchar, who captured the 2014 RBC Heritage for one of his nine PGA Tour victories, birdied two of the last four holes to cap a 69 and is four down in a tie for eighth with Jordan Spieth (68), Chad Ramey (70), Mito Pereira of Chile (71), Sepp Straka of Austria (71) and Joaquin Niemann of Chile, who managed only a 72 after opening with 65.

Second-ranked Collin Morikawa of La Canada Flintridge and Cal put up a second straight 70 and  tied for 34th, while eighth-ranked Justin Thomas is tied for 43rd after a 71, and Stewart Cink, who won the RBC Heritage for the third time last year, stumbled to a 75 and is tied for 56th but made the cut on the number.

Fifth-ranked Cameron Smith of Australia, the Players champion, posted a 70, and ninth-ranked Dustin Johnson had a 71, both tying for 72nd to miss the weekend by one stroke.