VanderVeer, Soicher Share Title in San Diego Am as Final Round is Rained Out 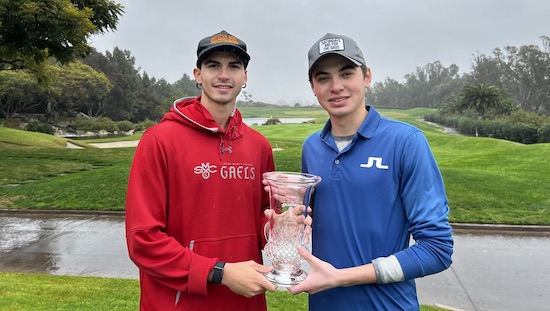 Dylan VanderVeer of Mill Valley and Ben Soicher of El Dorado Hills shared the title when the second and final round of the Amateur Golf.Com San Diego Amateur was rained out at Aviara Golf Club in Carlsbad.

Officials hoped to play the second round, but there was standing water on the greens and round two was cancelled at 11 a.m.

VanderVeer (pictured left), a graduate student at St. Mary’s College in Moraga, made four birdies on the back nine and posted a first-round score of 1-under-par 70 that was matched by Soicher (right) of the University of Denver, who made a birdie on the final hike.

“I haven’t played golf in over a month,” said VanderVeer, a St. Mary’s College golfer from Corona Del Mar who captured the Memorial Amateur at Ancil Hoffman Golf Course in Carmichael earlier this year. “That was my secret.”

Nick Woo of Novato shot 71 to tie for third with Darren Chiu of Oak Park and UC Davis, while Mikey Slesinski of Fremont and St. Mary’s totaled 72 to tie for fifth with Davis McDowell of San Rafael and UC San Diego, and Daniel Discanero of Seattle and USC.