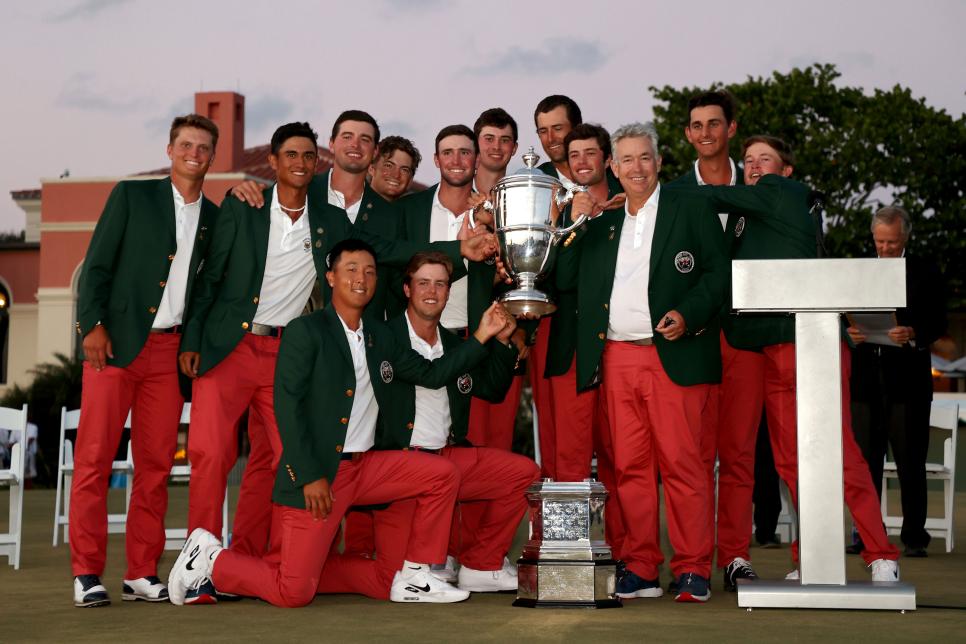 Veteran Stewart Hagestad of Newport Beach claimed the winning point as the United States retained the Walker Cup with a 14-12 victory over Great Britain and Ireland at Seminole Golf Club in Juno Beach, Fla.

The 30-year-old Hagestad, playing in his third Walker Cup, finished things off with a 4-and-2 victory over Ben Jones of England as the Americans claimed a 5-4-1 margin in the 10 Sunday afternoon singles and took a 38-9-1 lead in the biennial event first played in 1922.

The Americans have won three in a row, four of five and seven of the last nine.

“I feel very lucky to be a part of it,” said Hagestad, who won the 2016 U.S. Mid-Amateur Championship. “These guys are so talented and they are going to go on and have great careers.”

Hagestad, who lost his first two matches of the competition, fell behind as Jones won the first two holes, but Hagestad turned the match around by winning five consecutive holes, starting at No. 9.

“This is full circle for me,” Crosby said. “The Walker Cup is a spectacle. To win at Seminole is a dream for me.”

Ricky Castillo of Yorba Linda and the University of Florida defeated John Murphy of Ireland, 2 and 1, to become the only player to finish the two-day event with a 4-0 record.

“It’s a pretty cool experience for my first Walker Cup,” Castillo said. “This is the pinnacle of amateur golf.”

Austin Eckroat of Edmond, Okla., and Oklahoma State routed Mark Power of Ireland, 7 and 6, in the opening singles match on Sunday, and Pierceson Coody beat Plano, Texas, and the University of Texas beat Alex Fitzpatrick of England, 3 and 1, to get the Americans started on their way to victory.

After Castillo’s victory, Cole Hammer of Houston and the University of Texas, downed Ben Schmidt of England, 4 and 3, before Hagestad put the Americans over the top.

Quade Cummins of Weatherford, Okla., and the University of Oklahoma gave the U.S. a half-point, winning the 18th with a par to pull even with Barclay Brown of England.

Great Britain and Ireland took 2½ of the four points in the morning foursomes to pull to within 8½-7½.

Power and Murphy beat Coody and Pak 1 up, Lamb and Dyer routed Hagestad and Strafaci 6 and 5, and Flanagan and Schmidt halved with Hammer and Thompson, while Castillo and Mouw topped Fitzpatrick and Brown, 1 up.

The 2023 Walker Cup is scheduled for the Old Course at St. Andrews.