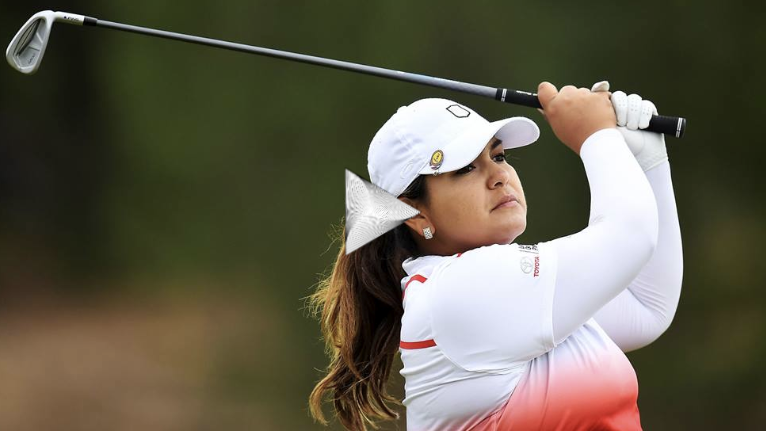 The United States swept a session for the first time in the history of the Solheim Cup, winning all four of the four-ball matches from Europe in afternoon play of the 15th edition of the biennial competition.

The Americans, who hold a 9-5 lead in Solheim Cup play, took a 5½ to 2½ lead into the Saturday, the second of the three-day event at Des Moines Golf Club in West Des Moines, Iowa.

“That’s nice, but that’s not the kind of history we want to make,” said U.S. Captain Juli Inkster, from Los Altos and San Jose State. “What we want is to have the Cup on Sunday night.

“I’m sure Annika (Sorenstam, the European captain) will have her team fired up on the weekend and we have to keep playing well, but it was amazing this afternoon.”

Lizette Salas (pictured) of Azusa and USC, who teamed with Danielle Kang of Westlake Village and Pepperdine for a 1-up victory over Carlota Ciganda of Spain and Caroline Masson of Germany in the morning foursomes competition, set the tone for the U.S. by sinking birdie putts on the first three holes in the afternoon.

That powered Salas and Solheim Cup rookie Angel Yin of Arcadia to a 6-and-5 rout of Ciganda and Emily Pederson of Sweden that started the American surge.

“I didn’t like the way I putted in the morning, but was glad to get that win,” Salas said. “I wanted to change that in the afternoon.

“I’ve known Angel for a while and to have her as a partner I knew it would be a good fit. The way I was putting kind of made her a little less stressful and vice versa. She helped me when I needed help, so we made a great team.”

In the other afternoon matches, Kang and Michelle Wie of Stanford defeated Jodi Ewart Shadoff of England and Madelene Sagstrom of Sweden, 3 and 1, Brittany Lincicome and Brittany Lang downed Masson and Florentyna Parker of England, 3 and 2, and Stacy Lewis and Gerina Piller beat Charley Hall and Georgia Hull, both of England, 2 and 1.

“I could not have asked for a better Solheim Cup debut; it was amazing,” said Kang, who won the KMPG Women’s PGA Championship for her first major title last month. “It was great to get two points for the team my first time out.”

The Euros took a 2½ to 1½ lead after the morning foursomes matches, with Hall and Anna Nordqvist of Sweden beating Paula Creamer of Pleasanton and Austin Ernst, 3 and 1, while Karine Icher of France and Catriona Matthew of Sweden defeated Lewis and Piller, 1 up.

Hull and Mel Reid of England halved their match with Kerr and Lexi Thompson, while Kang and Salas gave the U.S. its only victory.

The Europeans have swept sessions three times from the Americans, who finally were able to turn the tables.