Stenson leads Wyndham by 1 after 3rd round 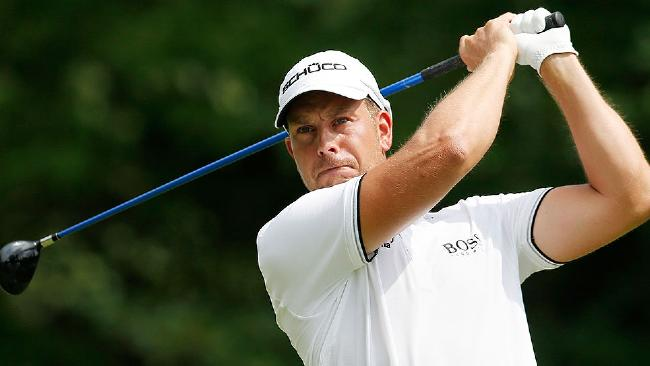 Henrik Stenson of Sweden posted a second straight 4-under-par 66 to take a one-stroke lead over Webb Simpson, Kevin Na of Diamond Bar and Ollie Schneiderjans after three rounds of the Wyndham Championship at Sedgefield Country Club in Greensboro, N.C.

Stenson, the top-ranked player in the field at No. 9 in the world, birdied three straight holes through No. 15 and then took the lead with a nine-foot birdie putt at No. 17.

“Very calm and collected there,” Stenson said after bouncing back from a double bogey on the seventh hole and a bogey on the 11th. “Seemed to be that way. Things weren’t going great in the middle of the round, but I was hanging in there.

“Made a couple of putts coming home and we find ourselves where we want to be. Got to keep producing chances. What I’ve done so far is working pretty well and I’m playing the course the way I think it’s best for me. I hope it’s the same tomorrow.”

The Big Swede, who hasn’t won since claiming his first major title last year in the Open Championship at Royal Troon for his 19th professional victory, is at 16-under 194 through 54 holes.

Simpson, the 36-hole co-leader who claimed his first PGA Tour title in the 2011 Wyndham, made his only bogey in a 68 on the 17th hole, while Na shot 65 and Schneiderjans carded a 66.

Johnson Wagner, who holed his second shot of the round from 95 yards to kick start a 65 after making a double eagle and eagle the day before, is two shots back in solo fourth, while Davis Love III, who won the Wyndham for the third time in 2015 at the age of 51, totaled 67 and is another stroke down in a tie for sixth with Richy Werenski, who had a 64, and Harold Varner III, who came in at 66.

Soren Kjeldsen of Norway collected five birdies on the back nine in a 66 and is four down in a tie for ninth with Shane Lowry of Ireland, who sank a six-foot eagle putt on the 15th hole in a 67.