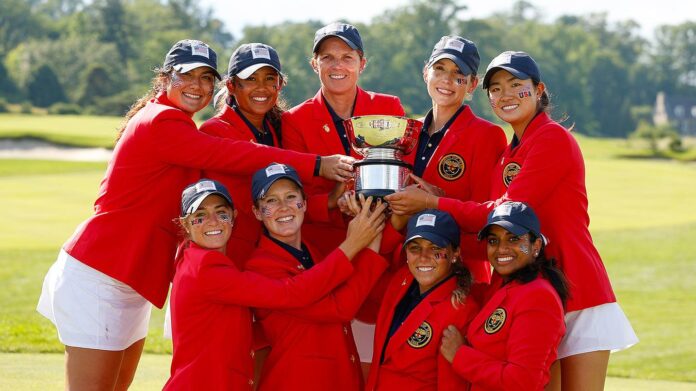 Three players from California helped the United State retain possession of the Curtis Cup with a 15½-4½ trouncing of Great Britain and Ireland on the East Course at Merion Golf Course in Ardmore, Pa.

“Just playing at such a top golf course in great condition, it’s difficult but they managed it pretty well, I have to say,” U.S. Captain Sarah LeBrun said of her team. “Just the greens, the pureness of the putts, how they roll, and the speed, they have to really be precise on their reads and things like that. I know they enjoyed it. They had a good time.”

Rachel Kuehn of Ashville, N.C., and Wake Forest provided what proved to be the winning point to for the Americans with a 2-and-1 victory over Caley McGinty as the Americans won seven of the eight singles matches on the final day.

Kuehn finished the competition with a 3-1 record.

“Our team gelled so well,” Kuehn said. “I think it was a huge factor to our success. Anyone can go out and play with anyone, and there was no issue, there was no tension, there was nothing. We just enjoyed each other and I think just speaks to how close we are.”

Rose Zhang, the top-ranked amateur in the world and the 2022 NCAA individual champion from  Stanford and Chino set the tone for the U.S. by routing Women’s British Amateur champion Louise Duncan, 7 and 5, in the first singles match of the day.

Zhang also played on the U.S. winning U.S. team last year at Conwy Golf Club in Wales after the matches in 2020 were delayed for a year because of the Coronavirus pandemic.

“I feel like this win just shows the camaraderie and the amazing ability that we had within ourselves. It couldn’t have ended any better.”

Rachel Heck of Memphis, Tenn., and Stanford finished with a 3-0-1 record after claiming a 2-and-1 victory over Lauren Walsh, and Amari Averi of Riverside and USC wound up at 4-1 after losing her singles match to Emily Price, 4 and 3.

Despite the defeat, Price called the experience … “one of the best weeks of my life on the golf course.”

The next Curtis Cup will be played at Sunningdale Golf Club in Ascot, England, in 2024.