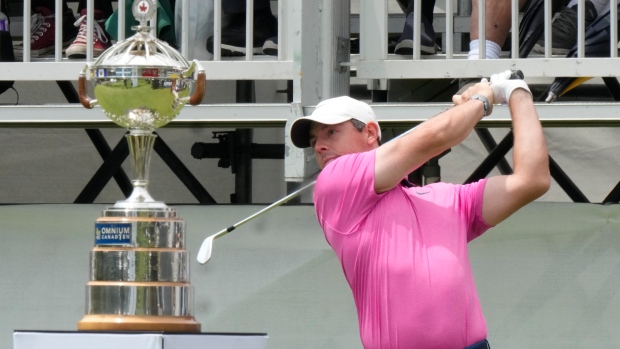 Rory McIlroy of Northern Ireland stumbled a bit coming home, but rallied to repeat himself.

Defending champion McIlroy lost a three-stroke lead before making birdies on the last two holes to shoot 9-under-par 61 and beat Tony Finau by two strokes in the 111th RBC Canadian Open at St. George’s Golf and Country Club in Toronto.

The eighth-ranked McIlroy also won this tournament in 2019, but it was not played the last two years because of the Coronavirus pandemic. He will be one of the favorites in the 122nd United States Open, which starts Thursday at The Country Club in Brookline, Mass.

“It’s just incredible,” said McIlroy, who won for the second time this season and the 21st time in his PGA Tour, but repeated in a tournament for the first time. “It was great playing with Tony and JT (Justin Thomas) today. I think 6-under was the worst score we had.

“This is my 21st PGA Tour win and I’m just so happy to get it done. I think I needed a total reset after Covid-19 and I rededicated myself, put in a lot of hard work, gave it 100 percent. I have a great team around me and everyone helped me out in so many ways.

“To win again just means so much. This is a day that I’ll remember for a long, long time.”

Finau had three birdies on each nine in his bogey-free 64, which he capped with a 42-foot putt on the last hole, while the sixth-ranked Thomas wound up four shots back in third after tying McIlroy for the lead before falling back with bogeys on the last two holes to cap another 64.

Justin Rose of England made eagle putts on the first, 11th and 15th holes, and added seven birdies before two late bogeys left him at 60 and five down in a tie for fourth with ninth-ranked Sam Burns, who carded a second straight 65.

“I’m totally disappointed, because you know what’s at stake, that’s for sure,” Rose said after his poor finish. “You’re really just playing the last hole – I never shot 59 before – so it would have been a lovely footnote on the week.”

Corey Conners of Canada sank a 9-foot eagle putt at No. 11 and added six birdies in a bogey-free 62 to finish seven strokes behind in solo sixth, while Keith Mitchell made a 10-foot eagle putt on the 11th to highlight a 66 and wound up nine shots down in a tie for seventh with Chris Kirk, who had a bogey-free 66, and Wyndham Clark, the leader after each of the first two rounds, who closed with a 69.

Danny Lee of New Zealand made four birdies on the back nine in a 65 to wind up 10 back in a tie for 10th with Shane Lowry of Ireland, who sank a 13-foot eagle putt at No. 11 in a 66, and Matt Fitzpatrick of England, who made his only bogeys on the last two holes to finish at 67.

Top-ranked Scottie Scheffler carded two late birdies for a 66 to tie for 18th, and fourth-ranked Cameron Smith of Australia tied for 48th following a wild 71 that included five birdies, four bogeys and a double-bogey.