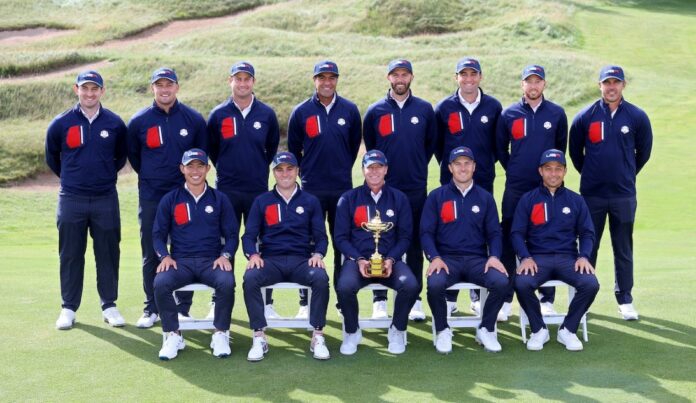 Perhaps Team USA needs somebody like country boy Boo Weekley to loosen things up this week for the 43rd Ryder Cup.

Weekley did his imitation of Happy Gilmore’s “Bull Dance” while leaving the first tee of his singles match against Oliver Wilson of England on the last day of the 2008 Ryder Cup and claimed a 4-and-2 victory as the Americans regained the Cup, 16½-11½ at Valhalla Golf Club in Louisville.

Even though the United States leads the series, 26-14-2, Europe has won four of the last five matches since that day in 2008, with the only U.S. victory coming by a score of 17-11 in 2016 at Hazeltine National Golf Club in Chaska, Minn.

This event originally was scheduled for last year, and there was talk about playing it without fans because of the Coronavirus pandemic, but instead it was postponed until now, starting with morning and afternoon sessions of four fourball and four foursome matches on Friday and Saturday, and climaxing with 12 singles at Whistling Straits Golf Course in Sheboygan, Wis.

“Being here and playing without fans would have been really disappointing,” said U.S. Captain Steve Stricker, a Wisconsin native. “We’re planning on having a lot of rowdy fans, especially on the first hole. We need that on our home turf and that’s what the Ryder Cup is all about.

“Every Ryder Cup is a little bit different and Paris in 2018 was absolutely amazing, almost like a football stadium atmosphere. When I played, I remember how nerve-racking it was, but I was excited and couldn’t wait to get out there and play.

The Americans, who are slight favorites, have six Ryder Cup rookies on their 12-man roster, but that’s a little misleading.

Collin Morikawa of La Canada Flintridge is the reigning Open champion and a two-time major winner, Xander Schauffele of La Jolla and San Diego State is the Olympic Gold Medalist and Patrick Cantlay of Los Alamitos and UCLA is the FedEx Cup champion.

The other three rookies are Harris English, who claimed his second PGA Tour victory by winning an eight-hole playoff in the Travelers Championship in June; Daniel Berger, a four-time PGA Tour winner who has the 2015 Rookie of the Year, and Scottie Scheffler, who has yet to win on the PGA Tour but has eight top-10 finishes this season after winning twice on the 2019 Korn Ferry Tour.

Koepka has battled a wrist injury and Morikawa has had a back problem recently, but both appear to be healthy.

“I’ve talk with both of those guys and they told me they are completely ready to go,” Stricker said.

The Europeans, captained by Padraig Harrington of Ireland, have top-ranked Jon Rahm of Spain, while the Americans have eight players in the top 10 of the World Golf Rankings, but that hasn’t meant much once the first tee shot is hit in the Ryder Cup.

The European rookies are Viktor Hovland of Norway, who has won twice on the PGA Tour and once on the Euro Tour;  Bernd Wiesberger of Austria, who has eight European Tour titles, and Shane Lowry of Ireland, winner of the 2019 Open Championship who has a total of seven victories on the two major tours.

“I have a nice, strong, balanced team,” Harrington told Sky Sports. “It’s very balanced. Good for foursomes and fourballs. We are well prepared at this stage, certainly in my head. It’s the Ryder Cup so I’m sure there will be a few things that happen that throw up a few complications, but we are well prepared and whatever comes at us we should be able to deal with.

“ … I want to make sure everybody has a great experience where these are the best days of their lives. I could go through all those cliches. But ultimately, I want to win.”

The Ryder Cup was first played in 1929 with the United States against Great Britain, which at times included players from Ireland, and in 1973 the team name was changed to Great Britain and Ireland.