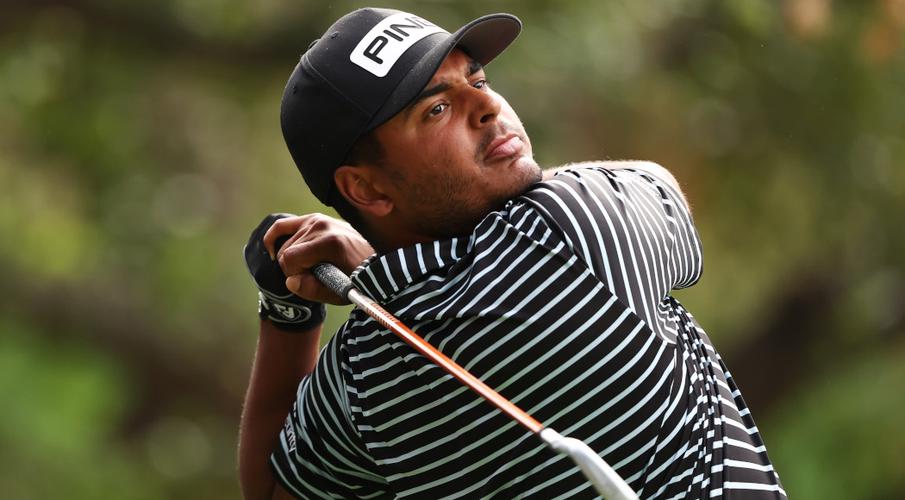 Sebastian Munoz of Colombia got rolling early, and other than one big hiccup, didn’t slow down in the first round of the Zozo Championship at Sherwood.

The 27-year-old Munoz holed out for two eagles on his way to an 8-under-par 64 and took a one-stroke lead over third-ranked Justin Thomas and ninth-ranked Tyrrell Hatton of England after one round at Sherwood Country Club in Thousand Oaks.

The Zozo Championship, which was played for the first time last year, was moved from Japan to Sherwood because of concerns over the Coronavirus pandemic.

“I felt great all day, even though I got off to a slow start with a three-putt bogey on the first hole,” said Munoz, who won the 2020 Sanderson Farms Championship among his four pro victories. “Then I just started hitting great shots and making putts, made a couple of eagles. It was just a great day.

“Sometimes, you just want to stay out of your own way and let it happen. I just kept hitting it up there and giving it a chance. There are some days when the ball just seems to want to go in the hole and this was one of them.”

Thomas sank a nine-foot eagle putt on the 16th while shooting 7-under 29 on the back nine in his 65, which Hatton matched by making four birdies on each nine against a single bogey.

“I drove the ball really well today, had only one real brain fart on the front, but had a little trouble reading the greens,” said Thomas, who tied for 12th in defense of his CJ Cup title last week. “I know you can make a lot of birdies here, so I started hitting the ball closer to the hole and making some putts.

“I’ve seen this course on TV, it’s a beautiful place, the weather is nice and it’s enjoyable playing here.”

Said Hatton, who tied for third in the CJ Cup after winning the BMW PGA Championship at Wentworth near London two weeks ago: “My confidence is pretty high right now and I just feel like I can go out shoot a good number. The scores are going to be low this week, so I hope I can keep it up for the next few days.”

Left-hander Brian Harman carded five straight birdies through No. 6 while finishing a 66 on the front nine and is tied for fourth with Lanto Griffin, who eagled the 13th hole, Harris English, Kevin Kisner and Dylan Frittelli of South Africa.

Patrick Cantlay of Los Alamitos and UCLA posted a bogey-free 67 and is a big tie for ninth with Mackenzie Hughes of Canada, Cameron Smith of Australia, Justin Rose of England, Alex Noren of Sweden, Scottie Scheffler, Abraham Ancer of Mexico and Mark Hubbard.

Second-ranked Jon Rahm of Spain is tied for 17th at 68, while seventh-ranked Xander Schauffele of La Jolla and San Diego State shot 69 and is in a tie for 26th that includes eighth-ranked Webb Simpson.

Defending champion Tiger Woods, who won his charity tournament five times at Sherwood, struggled to a 76 and is tied for 75th.

Gary Woodland, who won the 2019 U.S. Open at Pebble Beach, was 3-under through seven holes when he was forced to withdraw because of a hip injury.