THE NEXT LEVEL IN GOLF TRAVEL 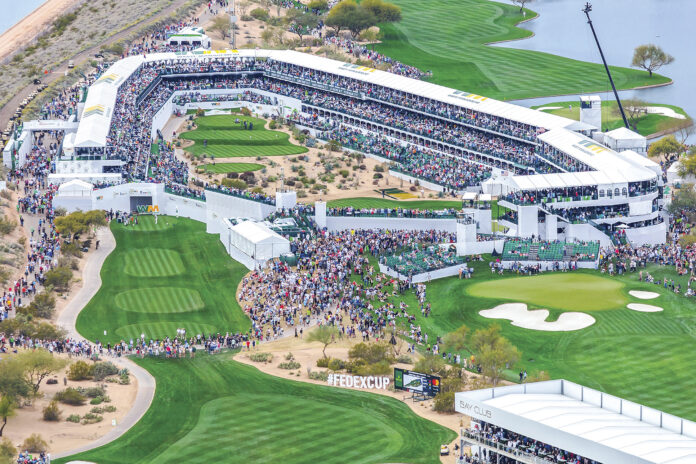 Combining bucket-list sporting events and authentic travel experiences with spectacular golf on the world’s greatest courses is what Golf Traveller does best, all wrapped up in a bespoke itinerary designed to meet your every need.

The atmosphere of the Super Bowl is something that can’t be captured or truly felt on television, it’s what the term ‘bucket list’ was invented for, an event every sporting fan wants to see, first-hand, at least once in their lifetime.

Getting a ticket for that in the same week as you’ve experienced another of sport’s ‘big ticket’ items, the Waste Management Phoenix Open in neighbouring Phoenix, and you’re talking next-level travel. Spliced in and around the two sporting event galacticos are rounds in the dramatic landscape of the Sonoran Desert such as at the Scott Miller-designed Cholla, at We-Ko-Pa or at Grayhawk Golf Club for Tom Fazio’s Raptor.

In between the golf and events? Insider tours of the art galleries, museums, restaurants and ‘Old West’ charm of Scottsdale itself as part of a bespoke itinerary taking in the best restaurants [the locals’ choice], the best bars and seamless transfers designed to get you where you want to go, when you want to go.

Super Bowl LVII and the Waste Management Phoenix Open is a prime example of a Golf Traveller experience. They combine the needs of a discerning golfer – the best courses, access to exclusive clubs – into an immersive travel experience, using in-depth destination knowledge to create a tailored itinerary that meets your every travel need, from where and what you eat, to the hotel you stay in, to the activities you do, and of course the golf you play. It could be Arctic Circle golf and the Northern Lights or gastronomy golf in San Sebastian or playing Open links golf around the main event itself, to discover more about the experiences offered, explore Golf Travellers 50 Best Golf Experiences at golftraveller.com

5 OF THE 50 BEST
GOLF EXPERIENCES

Golf Traveller has compiled a list of the 50 Best Golf Experiences, revealed each week on their social media channels and viewed at golftraveller.com/50-best.

Here are five of the entries…

Arriving via helicopter to your 17th-century Scottish castle, your private staff greet you ready to cater for your every need, whether it be a dram of the finest single malt, the sound of bagpipes to soundtrack your Scottish feast, or even some highland dancing. From your historic abode in the Angus glens, you have Scotland’s finest to play – St Andrews, Carnoustie, Gleneagles, Royal Aberdeen and Trump International.

DECADENT FRANCE PAST AND PRESENT AND RYDER CUP GOLF

Take in the splendour of the Palace of Versailles, where French royalty once held court in the most ostentatious fashion, and then sample modern-day decadence in the form of Gordon Ramsay’s Michelin-starred cooking before playing a Ryder Cup venue – all just a short drive from Paris. The 2018 Ryder Cup host Le Golf National, also set to host the 2024, is among the golf highlights that can also include Harry Colt’s Golf de Saint Germain.

Play two Open Championship courses, Royal Birkdale and Royal Lytham & St Annes Golf Club (10 and 11 Opens respectively), and be there when Rory McIlroy attempts to make it a Hoylake double – repeating his win in 2014 before heading for the most famous music venue in the world. A third round will take you to Formby – where then amateur Jose Maria Olazabal beat Colin Montgomerie in 1984’s Amateur Championship – another golfers’ favourite in this north-western corner of England.

Delve into the history and culture of New Zealand, while tackling some of the world’s most spectacular courses. The wild, verdant, volcanic, sometimes ethereal, Pacific-fringed landscapes of New Zealand provide the perfect home for some of the world’s most spectacular golf. Rounds include Kauri Cliffs, the most breath-taking of links courses, with no fewer than fifteen holes with a view of the Pacific and Tara Iti, New Zealand’s first-ever American-style private golf club and arguably Tom Doak’s finest work.

THE MASTERS AND ATLANTA’S MOST EXCLUSIVE GOLF CLUBS

Witness the battle for the Green Jacket, play Atlanta’s best, then head to Pinehurst No.2.

For golfers, April means one thing, The Masters at Augusta. Every golfer has spent that first full week of April transfixed by the legends of the game doing battle across Alister MacKenzie’s Georgian masterpiece. This experience not only gets you access to Augusta, but also rounds at some of the best private clubs in Atlanta before heading on to Donald Ross’s classic, Pinehurst No.2.