Tavatanakit Beats Ko by 2 in ANA 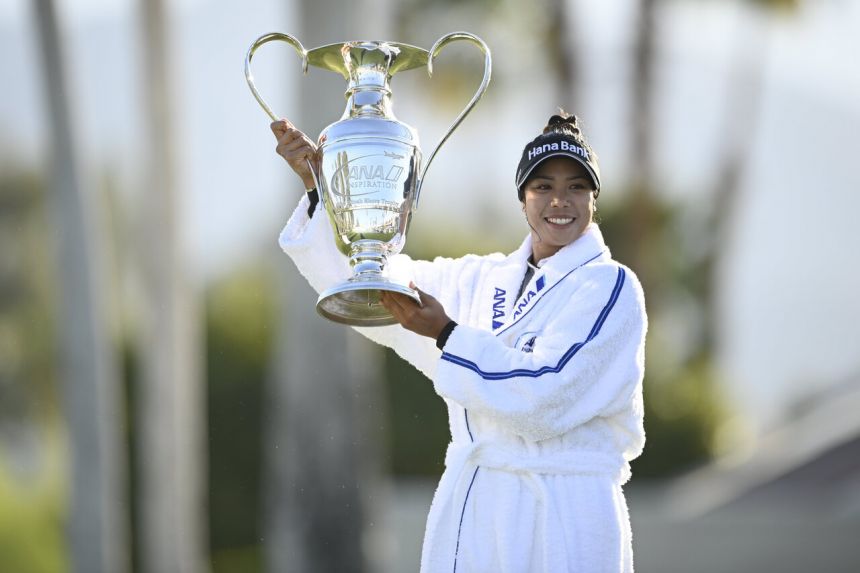 Patty Tavatanakit of Thailand and UCLA claimed her first LPGA Tour title and it was a major.

The 21-year-old Tavatanakit led virtually from wire-to-wire, closing with a bogey-free, 4-under-par 68 to hold off charging Lydia Ko of New Zealand by two strokes in the ANA Inspiration in 100-degree heat on the Dinah Shore Tournament Course at Mission Hills Country Club in Rancho Mirage.

“I didn’t look at the leaderboard at all today,” said Tavatanakit, who won three times on the Symetra Tour last season. “Just because. I saw (Ko’s) name up there, but I really didn’t look at it. I wanted to play my own game, which I did, and did a really good job of that today.

“I didn’t really care who did anything. I just wanted to focus on myself. It still hasn’t really sunk in yet, the fact that I just turned 21 six months ago and now I’m a major champion in my rookie year. Just crazy. It’s a dream come true.”

Tavatanakit, who claimed seven titles and was a two-time All-American at UCLA, chipped in for an eagle on the second hole and added birdies on the eighth and 12th holes plus 15 pars to record a score of 18-under 279 before taking the traditional winner’s leap into Poppie’s Pond at the 18th hole.

Two years ago as a sophomore, Tavatanakit finished as low amateur in the ANA Inspiration, tying for 26th.

Ko, 23, who has won 15 times on the LPGA Tour including the 2016 ANA but is winless since the 2018 LPGA Mediheal Championship, set a tournament record 7-under 29 on the front nine on her way to a bogey-free 62 that tied the mark set by Lorena Ochoa of Mexico in the 2006 ANA.

“My game was really solid and I felt like I gave myself a good run at it, but maybe Patty was just a bit too far away,” said Ko, who also eagled the second hole and added eight birdies. “I think it just shows it doesn’t matter how far back you are, you can always go for it.

“I don’t think it was like there was an exact moment where I felt like, ‘OK, this is going to be a good one.’ Especially around a course like this, you just have to focus until that last putt drops in the last hole.”

Third-ranked Sei Young Kim of South Korea birdied six of the first eight holes on her way to a 66 and finished seven shots back in a tie for third with third-ranked Nelly Korda, who eagled the ninth hole in another 66, Nanna Koertz Madsen of Denmark, who had an eagle at No. 11 in yet another 66, and Shanshan Feng of China, who shot a bogey-free 69.

Megan Khang posted a bogey-free 67 to wind up nine strokes back in a tie for 10th with Moriya Jutanugarn of Thailand, who shot 69, and defending champion Mirim Lee of South Korea, who came in at 72.

Fifth-ranked Danielle Kang of Westlake Village and Pepperdine finished 13th after a 65, seventh-ranked Brooke Henderson of Canada closed with a 70 to tie for 19th, and 10th-ranked Minjee Lee of Australia tied for 25th following a 67.

Ninth-ranked Hyo Joo Kim of South Korea shot 69 to tie for 28th, while sixth-ranked Lexi Thompson tied for 36th with a 68, and eighth-ranked Nasa Hataoka of Japan struggled to a second straight 74 to tie for 67th.