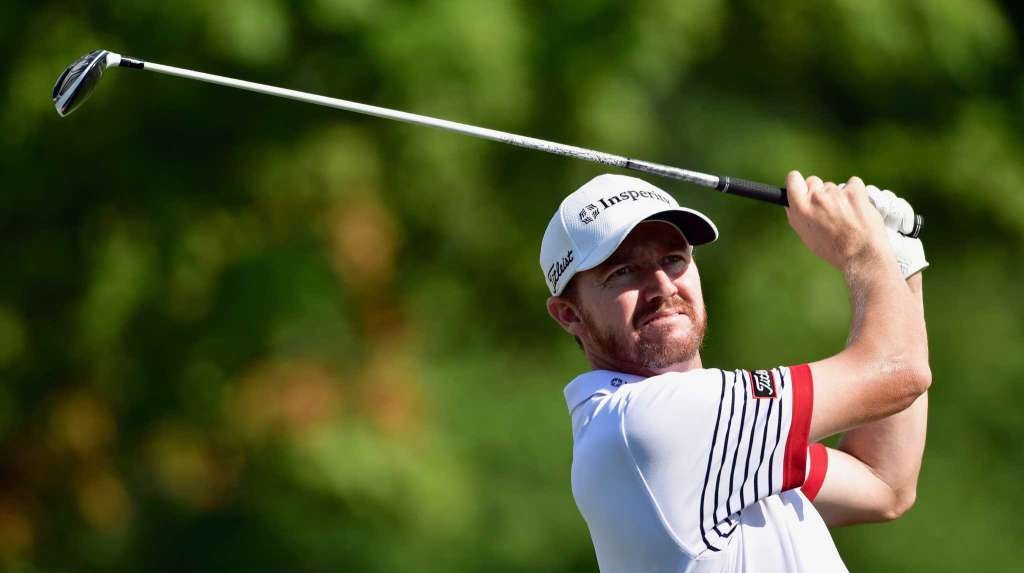 Jimmy Walker and Robert Streb never hit a shot on Saturday and remained tied for the lead as much of the third round was rained out in the 98th PGA Championship at Baltusrol Golf Club in Springfield, N.J.

Walker (pictured) and Streb, both looking for their first major title, lead at 9-under-par 131 after 36 holes.

“Kind of a long day trying to figure out what to do,” Streb said. “Obviously the course looks like it is unplayable. Everything is underwater, regardless of whether the lightning stopped.”

Thirty seven players completed their third rounds before the rains came, with 49 players either on the course or waiting to start.

Third-round play will resume at 7 a.m. Sunday morning and PGA officials announced they will try finish the tournament on Sunday, with the final round is scheduled to begin at 8:40 a.m. in nine-minute intervals with the same pairings from round three.

The laat time the PGA Championship was played at Baltusrol in 2005, weather delays also forced a suspension in play, with Phil Mickelson claiming the second of his five major victories in a Monday finish.

Jason Day, reigning PGA champion and No. 1 in the world, is tied for third with Emiliano Grillo of Argentina at 7-under. Fifth-ranked Henrik Stenson of Sweden, who claimed his first major title two weeks ago in the Open Championship at Royal Troon, is fifth at 6-under.

“You’ve just got to get some good sleep and make sure you eat enough and drink enough, plenty during the day, because it will be a long day,” Stenson said about the possible long Sunday. “It’s normally the mind that gives up before the body.”

Kevin Kisner, Patrick Reed, Brooks Koepka and Martin Kaymer of Germany, the 2010 PGA champ, are tied for sixth at 5-under, while seventh-ranked Rickie Fowler headlines an eight-way tie for 10th at 4-under.

Third-ranked Jordan Spieth is tied for 18th at 3-under and Mickelson is tied for 42nd at 1-under.

Kisner and Padraig Harrington of Ireland were able to finish the third round on Saturday and posted 65s. The 32-year-old Kisner, who has one PGA Tour victory, made seven birdies after two early bogeys.

Harrington, a three-time major winner who won the 2008 PGA, collected five birdies, including a four-foot birdie putt on No. 18, to move into the tie for sixth at 4-under.

Mickelson posted his first sub-par round of the weekend, a 68.

Sixth-ranked Bubba Watson shot a 70 and is tied for 47th at even-par.