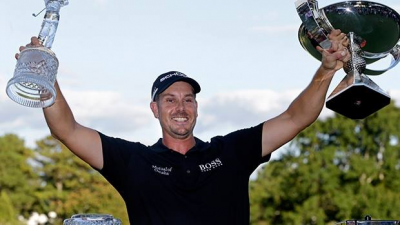 Henrik Stenson of Sweden, one day after wrapping up the Race to Dubai title, withdrew from this week’s South African Open, which he won last year to begin his dramatic career turnaround.

Stenson captured the DP World Tour Championship-Dubai on Sunday to win the season-long race on the European Tour, after winning the Tour Championship to claim the FedEx Cup on the PGA Tour.

The Swede won both titles, addition to finishing second in the Open Championship and the PGA Championship at Oak Hill, despite being hampered by a left wrist injury for several months.

“Despite my performance in Dubai, I am still having concerns about my wrist, and it really needs to rest,” said Stenson, who has risen to No. 3 in the World Golf Rankings behind Tiger Woods and Adam Scott. “Unfortunately, in our line of business, we have to be very mindful of injuries and be careful not to make matters worse. I wish everyone participating in this year’s SA Open a fantastic tournament.”

Last November, Stenson captured the South African Open by three strokes, winning for the first time since the 2009 Players Championship at TPC Sawgrass, and claiming his first victory in a tournament sanctioned only by the Euro Tour since the 2007 Dubai Desert Classic.