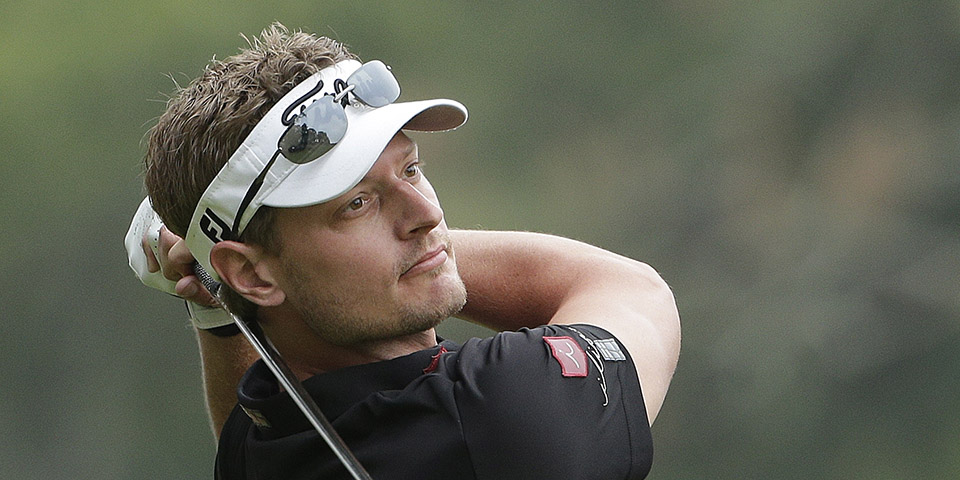 Brett Stegmaier sank a 13-foot birdie putt on the final hole to complete a 4-under-par 68 on Saturday and took a one-stroke lead over Morgan Hoffman to the final round of the Shriners Hospitals for Children Open at TPC Summerlin in Las Vegas.

The 32-year-old Stegmaier, who has never won as a pro and almost quit the game twice in the last few years, birdied three of the last six holes and overcame his only bogey of the round at No. 17.

Stegmaier, who played college golf at Florida, shot 66 each of the first two rounds and was at 13-under 200 through 54 holes.

“I felt really comfortable,” said Stegmaier, who is playing in only his fifth PGA Tour event after finishing ninth in the four-event Web.com Tour Finals earlier this month to earn his card on the big circuit. “It’s really weird. I felt like I belong in this position.

“I drove the ball really well, but couldn’t get it close. I looked at the leaderboard on 13 and saw I was in the lead. Finishing with a birdie is always good and that putt put me (back) in the lead.

“That’s always a good position to be in.”

Hoffman, who also has not won on the PGA Tour, held a one-stroke lead after making four birdies in five holes, including three in a row through No. 17.

However, Stegmaier caught him with his birdie in the group ahead on No. 18 and Hoffman drove into the desert on the final hole but saved bogey with a 10-foot putt to finish a 69.

“It was a very up-and-down day, a roller coaster, but I’m still in it going to tomorrow,” Hoffman said. “I lost my tee shot to the left on 18, over-did it. I was happy to walk away with a bogey.”

Chad Campbell, a four-time PGA Tour winner who played at nearby UNLV, bounced back from two bogeys to start the back nine with two birdies down the stretch to post a 70.

Rickie Fowler of Murrieta, the highest-ranked player in the field at No. 5 in the world, pulled to within three strokes of the lead with a five-foot eagle putt on the 15th hole.

However, he hit into the water on the next two holes and played them in bogey-double bogey before holing a 13-foot birdie putt on No. 18 to card a 70 and was seven strokes back in a tie for 28th.

“It’s hard to play out of the water,” Fowler said with a wry smile.

Defending champion Ben Martin shot 67 and was five shots behind in a tie for 11th.