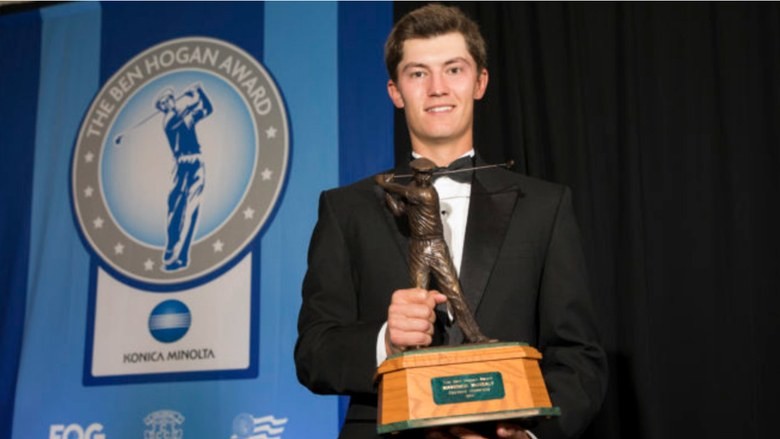 Maverick McNealy of Stanford was selected as winner of the 2017 Ben Hogan Award, presented annually to the top men’s college golfer by Colonial Country Club, Friends of Golf and the Golf Coaches Association of America.

McNealy received the award during a banquet in Fort Worth, Texas, at Colonial, which hosts the PGA Tour’s Dean & DeLuca Invitational this week.

“It’s very special,” said McNealy, who was a finalist the award three straight years, but lost out the last to two times to Jon Rahm of Arizona State. “You think of the quality of the people and the quality of the golfers on that trophy, guys that have contributed so much to the game of golf. It’s really cool.

“I think the cool thing about the Hogan legacy is how hard and driven and tireless he was in the pursuit of getting better. I think improving and getting better at things is one of the most rewarding things in my life. It’s really cool to see what all he did to get as good as he possibly could in golf. I think that’s a lesson for all of us going forward, to try and be the absolute best at whatever you do. That’s real important to me.”
McNealy earned an exemption into the 2018 Dean & DeLuca Invitational and a $32,000 grant was presented to the Stanford men’s golf scholarship program.
It was the sixth consecutive year that the Hogan Award has gone to a player from the Pacific 12 Conference, including Patrick Rodgers of Stanford in 2014.

McNealy is one of two players in the world currently ranked among the top 10 in all four major college and amateur ranking systems, including second in the World Amateur Golf Ranking and third in both the Golfstat and Golfweek college rankings.

The senior from Portola Valley, who also received the Mark H. McCormack Gold Medal as the top amateur in he world in 2016, has finished in the top five in six of his 10 events this season, including a victory in the Nike Golf Collegiate Invitational at Colonial.