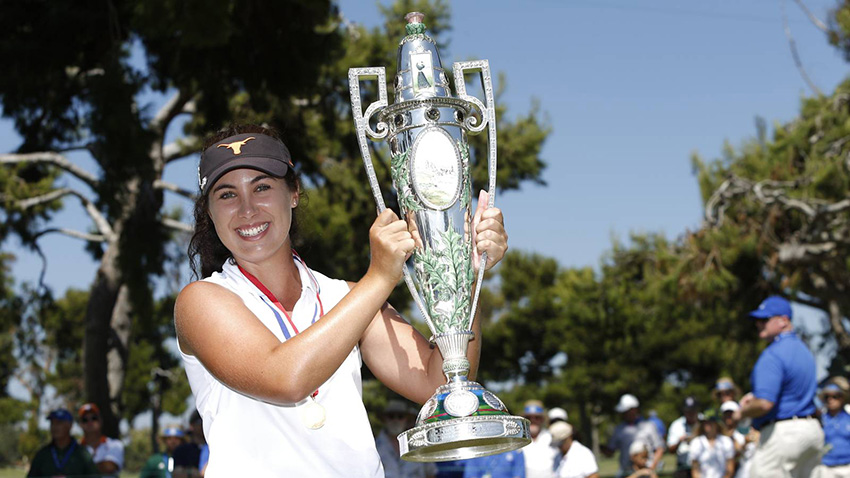 “It hasn’t set in yet,” said Schubert, a senior at the University of Texas who took a big step in earning a spot on the United States team for the Curtis Cup. “I’ve just worked so hard for this, and to finally be able to win something like this, it’s incredible. I don’t know when it’ll set in, but yeah, it’s exciting.

“It definitely gives me a lot of confidence. I’ve always wanted to go pro, but this really did it for me. Now I’m going to remain an amateur just to play in these events that I’m exempt in, and I think that’ll be an incredible experience for me.

“I would love to play in the Curtis Cup, yes, and I hope this helps.”

Schubert, playing in her first U.S. Women’s Amateur and second USGA championship, became the first player over the age of 19 to win the title in nine years, since Amanda Blumenherst, 21, of Scottsdale, Ariz., defeated Azahara Munoz of Spain in 2008.

By winning, Schubert earned possession of the Robert Cox Trophy for one year, and invitations to the 2017 Evian Championship, 2018 ANA Inspiration and 2018 Ricoh Women’s British Open, as long as she remains an amateur.

Both finalists are exempt into the 2018 U.S. Women’s Open at Shoal Creek near Birmingham, Ala.

Valenzuela, 19, a sophomore at Stanford who is No. 3 in the Women’s World Amateur Golf Ranking, was trying to become the first USGA champion from Switzerland.