Schauffele Leads Matsuyama by 1 Heading to Last Round of Olympics 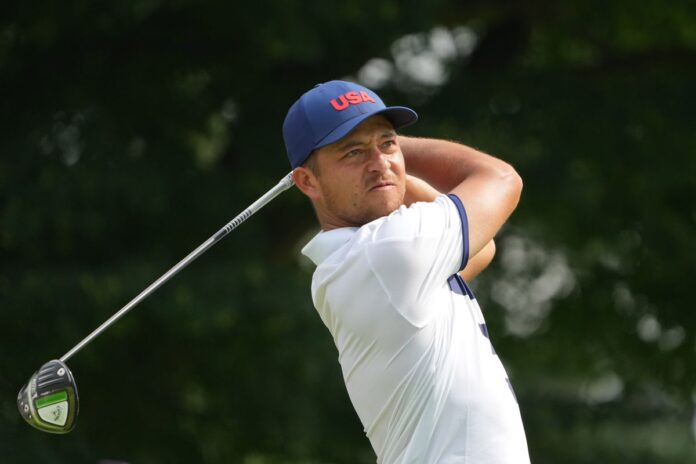 Xander Schauffele of the United States didn’t have his best stuff but remained in gold medal position.

The fifth-ranked Schauffele, from La Jolla and San Diego State, sank a four-foot bitdie putt on the final hole and scrambled to a 3-under-par 68 to take a one-stroke lead over Hideki Matsuiyama of Japan heading to the final round of the 2020-21 Olympic Games Golf Tournament on the East Course at Kasumigaseki Country Club in Saitama, Japan.

Schauffele was tied for the lead with playing partners Matsuyama, the Masters champion, and Carlos Ortiz of Mexico heading to the 18th hole, but regained the top spot with his birdie as Matsuyama made par and Ortiz fell back with a bogey.

“People always talk about how you have one off day in a tournament even if you’re playing well,” said Schauffele, whose last victory came in the 2020 Sentry Tournament of Champions. “I guess this was my day, and I’m going to the range now to try to straighten some things out. I don’t want to, but it’s something that has to be done.

“I’m fortunate to have a one-shot lead going to tomorrow and that’s where you want to be. I don’t play for money or medals, but if I win tomorrow, I will get the gold medal and that will be a special thing.”

Schauffele, who has won four times on the PGA Tour, collected five birdies along with bogeys on the seventh and 16th holes to hold the lead at the end of the second straight day at 14-under 199 through 54 holes.

Matsuyama bounced back from an opening bogey with five birdies in a 67, while Ortiz finished at 69 and is two shots back in a tie for third will Paul Casey of England, who birdied the last two holes to shoot 66.

“It was nice to bounce back from my only bogey with those birdies on the last two holes,” said Casey, who also birdied four of the first seven holes. “This is nothing like I’ve ever done before and I can’t wait to get started tomorrow.

“It’s been such a matter of pride this week to wear these shirts and hats for Team Great Britian with Tommy Fleetwood. We’re proud that Justin Rose (of England) won the gold medal in 2016. In the locker room, nobody talks about the silver or bronze, it’s all about the gold.”

Said Ortiz: “Even though I made that bogey at the end, I’m still right in there, and that’s all that matters. I’m playing for all of Mexico, the whole country.”

Rory McIlroy of Ireland, ranked 13th, carded a 67 and is three down in a tie for fifth with Sebastian Munoz of Colombia, who had six birdies in a 66, first-round leader Sepp Straka of Austria and Mito Pereira of Chile, who both finished at 68.

Fleetwood had nine birdies in a 64 that was the low score of the round and is one more down in a tie for ninth with Shane Lowry of Ireland, who birdied four of the first eight holes en route to a 68.

Third-ranked Collin Morikawa of the U.S., coming off his victory in the Open Championship at Royal St. George’s in England, birdied three of the last four holes for a 67 and is tied for 17th, while fourth-ranked Justin Thomas had five birdies a 68 and is in a tie for 38th that includes his U.S. teammate, 12th-ranked Patrick Reed, who wound up at 71.