Sagstrom Opens With 66 to Lead Korda, Ashok by One Stroke in Olympic Games 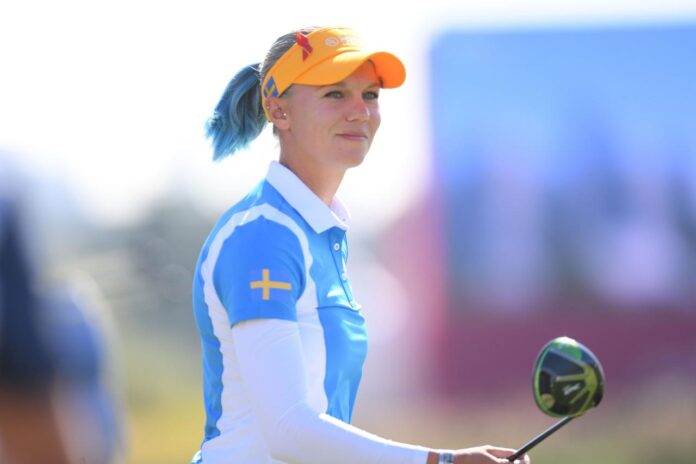 Madelene Sagstrom of Sweden is No. 75 in the Rolex Women’s World Golf Rankings and beat everyone ranked ahead of her in the first round of the Olympic Games Women’s Golf Tournament.

The 28-year-old Sagstrom carded a bogey-free, 5-under-par 66 to take a one-stroke lead over top-ranked Nelly Korda of the United States and Aditi Ashok of India in hot and humid conditions on the East Course at Kasumigaseki Country Club in Saitama, Japan.

“I just wanted to get in the fairway and give myself chances,” said Sagstrom, whose only PGA Tour victory came in the 2020 LPGA Boca Rio. “My putter was hot well and I was able make to make some birdies and get up-and-down for par when I needed to. It was nice to hit a good shot and make that par on the last hole.

“It’s just such an amazing experience to be here with all these great athletes in so many sports and I was just happy to finish up that way and know I have that kind of a game this week. It just makes me excited and positive for the rest of it.”

Sagstrom, who won three times on the Symetra Tour in 2016, made all five of her birdies on the first 10 holes before finishing with eight straight pars, including clutch five-foot par putt on the final hole that kept her alone on the top of the leaderboard.

“It was hard for sure because of the heat,” said Nelly Korda, who recently claimed her first major title in the Women’s PGA Championship. “I’m just sick of water by now. It was pretty hard out there because of the heat, but I played pretty well after a bit of a slow start, but it was difficult early on. I just did the best to execute my game plan and played better after the start.

“It’s just a tremendous honor to get up in the morning and put on the Red, White and Blue, and call myself an Olympian. It’s just definitely amazing to be able to represent my country in the Olympic Games.”

Second-ranked Jin Young Ko of South Korea made four late birdies to shoot 68 and is in a tie for third with Matilda Castren of Finland, who had three birdied down the stretch and Carlota Ciganda of Spain, who had four birdies in five holes through No. 12.

Third-ranked Inbee Park of South Korea, who won the 2016 Gold Medal in Rio de Janeiro, had three birdies on the first six holes but no more in a 69 and is in a large tie for seventh with fourth-ranked Sei Young Kim of South Korea, fifth-ranked Danielle Kang of the U.S., Azahara Munoz of Spain, Nanna Koertz Madsen of Denmark, Bianca Pagdanganan of the Philippines, Klara Spilkova of the Czech Republic, Min Lee of Australia and Wei-Ling Hsu of Taiwan.

Said Kang, who lives in Las Vegas: “I think this is the hottest weather I’ve ever played a round in. I was looking for shade anywhere, under a tree or whatever. But when you are playing for your country, you do whatever it takes. This is the highest honor I can ever possibly have, to represent my country in the Olympics.”

Ninth-ranked Nasa Hataoka of Japan had three late birdies to salvage a 70 and is in a tie for 16th that includes sixth-ranked Hoo-Joo Kim of South Korea, and Lydia Ko of New Zealand, who claimed the Silver Medal in Rio.

Eighth-ranked Minjee Lee of Australia totaled 71 and is in a tie for 23rd that includes Jessica Korda of the U.S., while Lexi Thompson of the U.S. is tied for 36th at 72, and seventh-ranked Brooke Henderson of Canada totaled 74 and is in a tie for 47th that includes 10th-ranked Yuka Saso of the Philippines and Shanshan Feng of China, who claimed the Bronze Medal in Rio. For complete results, visit https://www.espn.com/golf/leaderboard/_/tour/womens-olympics-golf