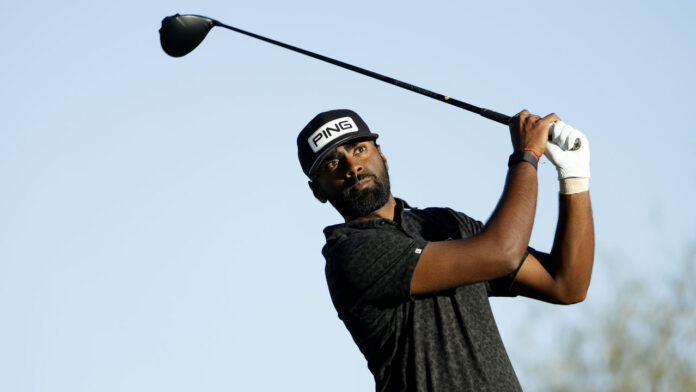 Rookie Sahith Theegala is showing that he belongs on the PGA Tour.

The 24-year-old Theegala, playing on a sponsor’s exemption, held a one-stroke lead over K.H. Lee of South Korea when darkness halted the first round of the 87th version of the WM Management Phoenix Open on the Stadium Course at TPC at TPC Scottsdale.

“It actually is a nice reset for me because I lost my driver stroke on the last few holes, so I will be able to go the driving range and get it back,” said Theegala, who is from Chino Hills and Pepperdine. “I hit some bad shots toward the end, but was able to save some pars.

“I was really pleased with my start, made four birdies in a row at one point and even missed a few that I could have made. I want to take advantage of this opportunity that they have given me, and I almost feel that I have nothing to lose, only to gain.

“I just want to hit some balls in the morning and just keep doing what I have been doing.”

Theegala, who had four top-10 finishes on the Korn Ferry Tour last season and tied for eighth this season in the Sanderson Farms Championship on the PGA Tour, birdied five of the first seven holes in round one and was a bogey-free 7-under-par through 16 holes when darkness ended the first round.

“I’m just very comfortable here,” Lee said. “Everything is better. Great start today, but I have a long way to go.”

Top-ranked Jon Rahm of Spain birdied the last hole for a bogey-free 67 and is in a large tie for seventh with fourth-ranked Patrick Cantlay of Los Alamitos and UCLA, who chipped in for an eagle on the 15th hole, seventh-ranked Justin Thomas, who had three late birdies in a bogey-free round, Louis Oosthuizen of South Africa, Alex Noren of Sweden, Bubba Watson, Charley Hoffman, Stewart Cink, Kevin Kisner and Billy Horschel, who eagled the third hole.