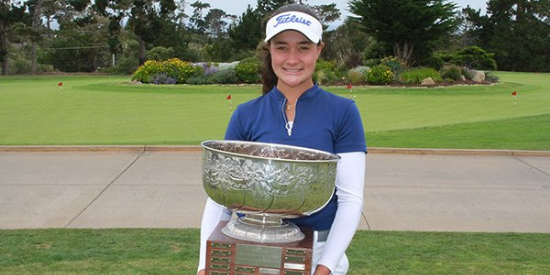 Kiara Romero of San Jose captured the 71st California Junior Girls State Championship on the Shore Course at Monterey Peninsula Country Club in Pebble Beach and the celebration that followed made it that much more meaningful for her.

The 15-year-old Romero was able to savor the achievement with her mother and father, Maricel and Rick, and her sister, Kaleiya, who is a sophomore on the Pepperdine women’s golf team.
“It means so much to me to have my family here,” said Romero, the 2020 Girls Junior Tour of Northern California Player of the Year, who recently finished her freshman year at California Connections Academy in Ripon. “It makes it that much more fun and exciting.

“A lot of the past champions are people I look up to. I’m honored to have my name (on the trophy) with them. I’ve been working very hard on my game, so this feels great. It’s the biggest win I’ve had so far.”

The top-seeded Romero claimed the title with a 3-and-2 victory over Anika Varma, a 17-year-old senior at Granite Bay High, who was the No. 1-ranked female amateur golfer in India before moving to the United States two years ago.

The match was even through the first nine holes, but Romero took the lead for good by reaching the green on the par-5 10th hole in two shots and sinking a 12-foot eagle putt.

Romero went 2-up by winning the 13th hole with a par after Varma drove into a fairway bunker, hit her approach shot into a greenside bunker and could not get up-and-down for par.

Romero remained 2-up by sinking a 20-foot par putt to halve No. 14, and when they halved the next two holes, it was over.

“ … It’s a lot of golf. It’s a long week. Match play requires a lot of thinking, too. Half of it with match play is the mental game. This is a win I’ll always remember.”

Said Varma, who has committed to Oregon: “I tried my best. It could’ve been better. But you always take the positives and just keep moving forward.”

In the semifinals, Romero turned back Kaylyn Noh of Rocklin, and Varma got past Ellie Bushnell of Granite Bay, who tied stroke play honors with Romero, both by scores of 3 and 2.