Roach Surprise Palmetto Leader by 1 at 64 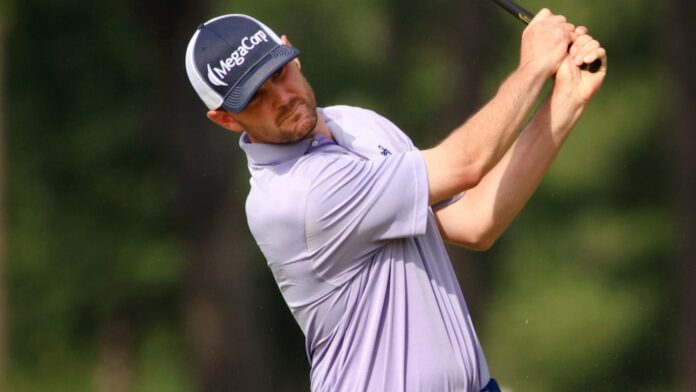 Wes Roach has never won on the PGA Tour, but he’s put himself in position to make a run for the title after one round of the Palmetto Championship at Congaree.

“It feels great, hard work paying off a little bit,” said Roach, who is leading for the first time in his 88 PGA Tour events and whose only top-25 finish this season was a tie for 13th in the Puerto Rico Open.

“I got off to a good start, then ran into some trouble on early on the back nine, but was able to save par with my short game. It’s just 18 holes and there’s a long ways to go, but I’m just going to do my best to stay present out there and just continue to hit quality shots.”

Roach, whose only pro victory came 2015 El Bosque Mexico Championship on what is now the Korn Ferry Tour, sank a 19-foot birdie putt on the 16th hole to break out of a five-way tie for the lead. He also holed out from 109 yards for an eagle on fourth hole and added five other birdies against a single bogey at No. 13.

Johnson, who seems to have snapped out of his mini-slump just in time for the U.S. Open at Torrey Pines next week, reeled off five of his six birdies while finishing off his 64 on the front nine, chipping in from 82 feet for a final birdie at No. 9.

“Yeah, I mean, you know, I’m playing well,” said Johnson, who has only one top-10 finish since winning the Masters in November. “I feel like I’ve been playing pretty good all year, just, like I said, but I just haven’t putted well. The short game has been a little off, but today I missed it in the right spots when I did miss it, but hit a lot of real quality iron shots and gave myself a lot of good looks.

“I felt like I’ve been swinging well for a while now, just haven’t really seen the results or seen the scores. Made a few putts, but, yeah, I mean just playing solid, finally put a good round together. … Hopefully I can keep it rolling for the rest of this week.”

Said Hadley, who has missed the cut in his last five tournaments and 12 times this season: “I’ve been playing awful and it’s been frustrating and a real challenge. But I played great today, hit a lot of good shots and actually was a cruise control for a while. I gave myself a lot of birdie opportunities and it felt awesome.”

Jhonattan Vegas of Venezuela sank a six-foot eagle putt on the second hole to kick-start a 66 and is in solo sixth, while Patrick Rodgers of Stanford carded a bogey-free 67 and is a huge tie for seventh with Nick Taylor of Canada, Tain Lee, Sam Ryder, Danny Lee of New Zealand, Vaughn Taylor, Kiradech Aphibarnrat of Thailand, Harris English, Chez Reavie, Byeong Hun An of South Korea, Richard S. Johnson of Sweden and Roger Sloan of Canada.

Tyrrell Hatton of England, who slipped out of the top 10 in the World Golf Rankings this week to No. 11, is tied for 54th at 71, while eighth-ranked Brooks Koepka shot 72 and is tied for 75th.