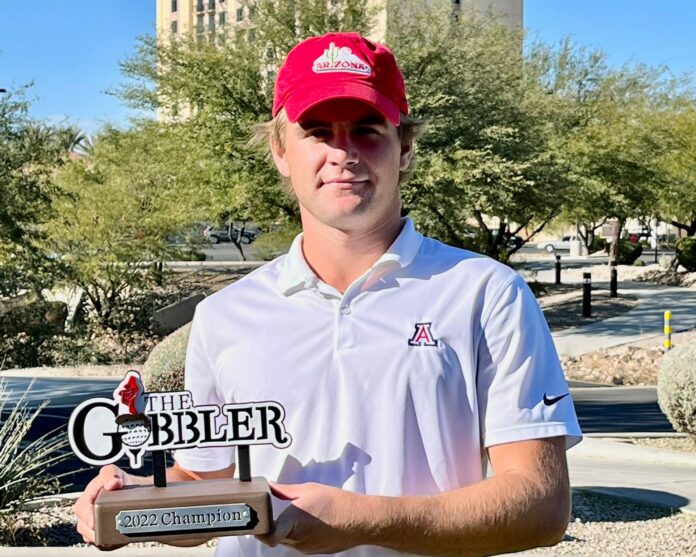 Griffin Rhoads of Huntington Beach rode a brilliant second round to a seven-stroke victory over Niall Shiels Donegan of Mill Valley in the Seventh Gobbler Amateur at Sewailo Golf Club in Tucson, Ariz.

After struggling to a score of 4-over for the first 17 holes in round one, Rhoads made a birdie on the final hole that started him on an incredible run of 15-under over the next 37 holes to pull away for the victory.

“I’m out here all the time and know the guys here well,” said Rhoads, who also won the Bayonet Blackhorse Amateur Championship earlier this year in Seaside. “It’s good to represent not just the U of A, but Sewailo as well.

“The first round was more of a mental issue. I wasn’t hitting the ball badly, I was just beating myself up. The second round I just stuck to my process and kept trying to get lower and lower. Honestly, today it was easier coming off that big day with the big lead.

“There was no reason I shouldn’t have been confident. It was definitely nice to have the cushion.”

The Gobbler Amateur was the sixth tournament in the 2022-23 Troon Saguaro Amateur Series. The next event in the Series will be the Desert Amateur on Dec. 2-4 at Ak-Chin Southern Dunes Golf Club in Maricopa, Ariz.