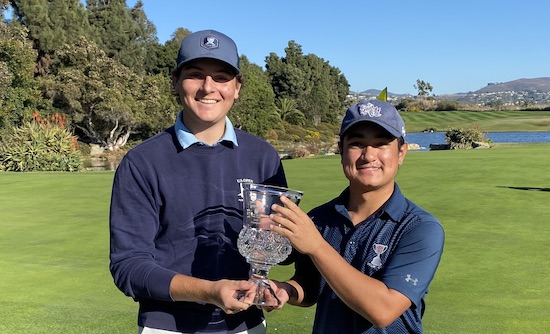 Easton Phillips of Coronado nearly gave the title away with a triple-bogey on the final hole of regulation, but made par on the second playoff hole to turn back Christian Schrodt of Mission Viejo and win the AmateurGolf.com San Diego Amateur by Aviara Golf Club in Carlsbad.

“I was trying to play a cut (from a fairway bunker) and just double-crossed it out of bounds left,” said Phillips, a junior at Coronado High, said of his errant shot on the final hole of regulation.

Phillips, who birdied the 16th and 17th holes to take a two-stroke lead, finished in a tie when Schrodt made a bogey on the last hole.

After Phillips saw his 30-foot birdie lip out on the first extra hole, he missed the comebacker from four feet, but Schrodt missed his five-foot par putt and both carded bogeys.

On the second playoff hole, Schrodt hit his approach shot into the water from the fairway bunker and Phillips hit the green from 185 yards out of the same bunker on the right side of the hole, and two-putted for the victory.