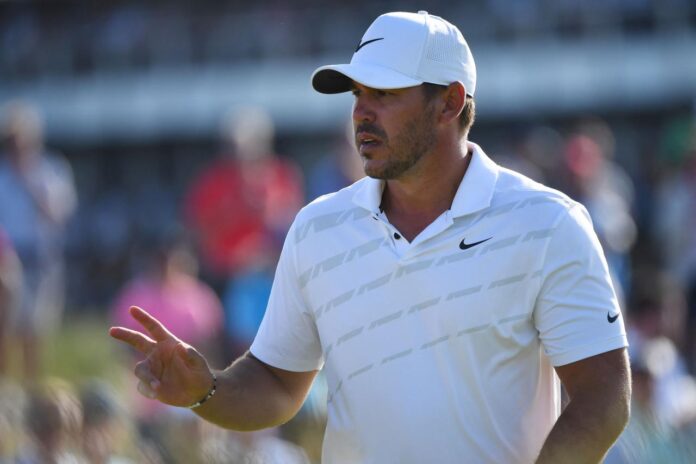 After a one-week hiatus because of the Olympic Games Men’s Golf Tournament, the PGA Tour is back on Thursday with the WGC-Fed Ex St. Jude Invitational at TPC Southwind in Memphis, Tenn.

For those who did not qualify for the WGC event, there is an opposite-field tournament, the Barracuda Championship on the Old Greenwood Course at Tahoe Mountain Golf Club in Truckee, as players jockey for position with the FedEx Cup playoffs beginning in two weeks with The Northern Trust.

The FedEx St. Jude Invitational, which started as the Memphis Open in 1958 when Billy Casper claimed the title, became a WGC event in 2019, when Brooks Koepka (pictured) claimed title, and Justin Thomas won it last year.

Tiger Woods won the WGC tournament, which started out as the WGC-NEC Invitational in 1999, a record eight times—the last in 2013.

Top-ranked Jon Rahm of Spain was forced to withdraw from the Olympics because he tested positive for Covid-19 and will not play again this week, but 48 of top 50 players in the World Golf Rankings are entered.

Seventh-ranked Bryson DeChambeau, who also withdrew from the Olympics because of a positive Covid-19 test, also has committed to play.

“It’s a place that I like,” Johnson, who is 15th in the FedEx Cup standings, said of TPC Southwind. “I feel like I know the course well. I feel like my game is in a good enough shape to contend this week. But you know, I’m just trying. … I want to put myself in a position to win come Sunday afternoon.

“It’s no different than any other week. No matter where I’m playing, what kind of tournament it is—whether it’s a major or a WGC event—I prepare the same. I need a good week this week.”

DJ holed out for a 171-yard walk-off eagle on the final hole of the tournament at TPC Southwind in 2018 to beat runner-up Andrew Putnam by six strokes, and there is a plaque on the ground in the 18th fairway commemorating Johnson’s brilliant shot.

Daniel Berger became the first player since David Toms to win the old FedEx St. Jude Classic in consecutive years when he claimed the first two of his four titles on the PGA Tour in 2016 and 2017.

“I’m extremely proud,” said Berger, who has won the 2020 Charles Schwab Challenge and the 2017 AT&T Pebble Beach Pro-Am since. “I’m 1-for-1 defending titles, so that’s a pretty good stat. I just battled so hard today and played so good. I just can’t be happier.”

The winner this week will feel the same with the FedEx Cup playoffs coming.

1. Brooks Koepka, United States – The sixth-ranked Koepka won the St. Jude Invitational the first time it was a WGC event in 2019, playing the weekend in 64-65, before opening with 62 last year en route to a tie for second. Despite injuries, he won the Phoenix Open this year, tied for second in the PGA, tied for fourth in the U.S. Open and tied for sixth in the Open Championship.

2. Rory McIlroy, Northern Ireland – Coming off a tie for fourth in the Olympics, McIlroy is seeking his fourth WGC victory, including this event when it was the Bridgestone Invitational in 2014. He also tied for seventh in the 2010 FedEx St. Jude before it was a WGC tournament. Rory has six top-10 finishes this season, including a victory in the Wells Fargo Championship.

3. Collin Morikawa, United States – Lost in a four-hole playoff for the Bronze Medal in the Olympics, but the third-ranked Morikawa has eight top-10 finishes this season, including victories in the Open Championship and his first WGC victory in the Workday Championship. He tied for second in his first appearance in the WGC-FedEx St. Jude Invitational last season.

4. Dustin Johnson, United States – DJ captured the Fed Ex St. Jude Invitational in 2012 and 2018, before it became a WGC event, and he tied for 20th in 2019 and tied for 12th last year. Johnson won the tournament when it was the WGC-Bridgestone Invitational, one of his six WGC titles. Has six top-10 results this season, including a victory in the Masters late last year.

5. Louis Oosthuizen, South Africa – The 2010 Open champion at St. Andrews has three runner-up finishes in his last five starts, and four this season, including in the PGA Championship and the U.S. Open. Oosthuizen also tied for third in the Open Championship among eight top-10 finishes this season. Tied for sixth in the 2020 WGC-FedEx St. Jude and tied for 20th in 2019.

6. Daniel Berger, United States – Claimed two of his four PGA Tour victories in the FedEx St. Jude before it became a WGC event in 2019, and also tied for second in the WGC event last year behind Justin Thomas by playing the weekend in 67-65. Berger has recorded seven top-10 finishes on the PGA Tour this season, including a victory in the AT&T Pebble Beach Pro-Am.

7. Viktor Hovland, Norway – Climbed into the top 10 of the World Golf Rankings for the first time at No. 10 by tying for 14th in the Olympics after tying for 12th in the Open Championship. Hovland has six top-10 finishes on the PGA Tour this season, including his second victory in the Mayakoba Classic. Best finish in the WGCs was a tie for second in the Workday this season.

8. Jordan Spieth, United States – Has regained his old form with nine top-10 finishes this season, including a victory in the Valero Texas Open and a tie for second recently in the Open Championship at Royal St. George’s. Spieth has never won a WGC tournament, but his best finish was a tie for third in this event in 2013, when it was the WGC-Bridgestone Invitational.

9. Justin Thomas, United States – The defending WGC-St. Jude FedEx champion hasn’t had his best stuff lately, but he closed with 68-65 to tie for 22nd in the Olympics. The fifth-ranked Thomas had all five of his top-five finishes early this season, including a victory in the Players. His two WGC victories have come in this event, including when it was the Bridgestone in 2018.

10. Xander Schauffele, United States – The Olympic gold medalist could be a factor if he gets over the hangover from winning in Tokyo. Schauffele hasn’t won on the PGA Tour since the 2019 Sentry Tournament of Champions, but has three runner-up finishes this year among his seven top-10s. Won the 2019 WGC-HSBC Champions and tied for sixth in this even last year.

1. Abraham Ancer, Mexico – Coming off a tie for 14th in the Olympics, Ancer has not won on the PGA Tour yet, but has six top-10s this season. T-15 in the WGC-FedEx St. Jude last season.

2. Will Zalatoris, United States – Won the 2020 TPC Colorado Championship and has seven top-10s since coming to PGA Tour this season. Finished T-22, T-28 in his only WGC starts.

3. Robert MacIntyre, Scotland – A two-time winner as a pro in Europe, MacIntyre has impressed this season with a T-8 in Open Championship and a T-9 in WGC-Dell Match Play.

5. Min Woo Lee, Australia – Has posted victories each of the last two seasons on the Euro Tour and finished T-28 in his first WGC event, the Workday Championship, earlier this year.