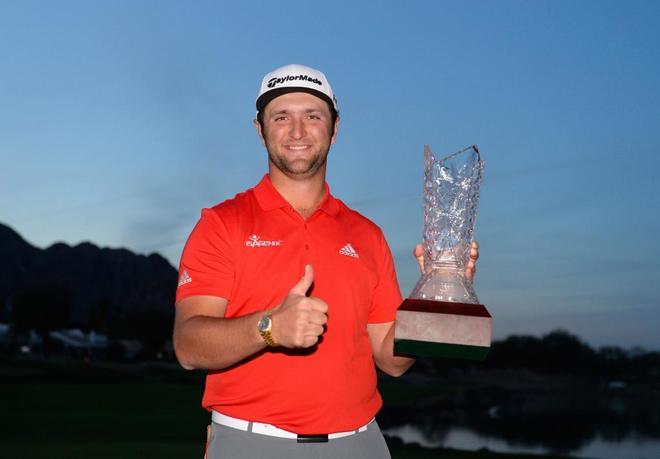 After a two-week run in Hawaii, the PGA Tour begins the West Coast Swing this week with The American Express at PGA West in La Quinta, where the two best players from last season—top-ranked Jon Rahm of Spain and fourth-ranked Patrick Cantlay of Los Alamitos and UCLA are in the field.

Rahm won this tournament, which began in 1960 and was formerly known as the Bob Hope Desert Classic among other names, in 2018 when he beat Andrew Landry with a birdie on the fourth playoff hole for one of his six PGA Tour victories, including the 2021 U.S. Open at Torrey Pines Golf Course in La Jolla with birdies on the last two holes.

“I try to focus on the PGA Tour early on just because I love the West Coast swing,” said Rahm, who also won the 2017 Farmers Insurance Open at Torrey Pines and proposed to his wife, Kelley, on a bluff overlooking the Pacific Ocean there.

“Obviously, (The American Espress) is an event that I really want to win again. It was really important to me because it’s not only a great event with a lot of history, with a legacy of a lot of great players, but it’s one of those courses—the Nicklaus course at PGA West is one of them that I played quite a few times as an amateur, an amateur event in Palm Springs every year. It’s world-class golf courses, a world-class venue. The greens on those golf courses are probably the best all year, comparable to Augusta National.

“There’s nothing really bad to say about this event. The crowds are amazing, the atmosphere on 16, 17, 18 is great. I really hope I don’t have to play 18 four more times this year (as he did in the playoff against Landy. Hopefully, I can get it done like before. It really is a great venue, and hopefully I can have as much fun.”

Rahm is looking forward to returning to La Quinta because last year he was forced to withdraw a few days before the tournament because of an injury.

“Truth is, I hurt myself in the gym on Friday,” Rahm said. “I’m feeling good, just not 100 percent. I could play and make the cut, maybe even a top 20, but if I don’t think I can win then no point in playing. I plan to be back next year.”

Pat McCabe, Executive Director of The American Express, said recently: “There is no better boost to our player field than to welcome the world’s top-ranked golfer to the Coachella Valley. We are thrilled to have Jon return as a past tournament champ and help shape what will be an all-around, first-class event.”

Every golfer in the field plays the PGA West Stadium Course, the Nicklaus Tournament and La Quinta Country Club over the first three rounds, and after the 54-hole cut is made, the final round is played exclusively on the Stadium Course.

3. Patrick Reed, United States – His game has run hot-and-cold early this season, but Reed did tie for second in the Bermuda Championship and tie for 15th in the Sentry TOC in his last start in Hawaii to open the new year. He claimed one of his nine PGA Tour victories in this event in 2014, but his best result in six other starts in the California desert was a tie for 12th in 2017.

4. Si Woo Kim, South Korea – The defending champion claimed his third victory on the PGA Tour when he held off Patrick Cantlay by shooting 64 in the final round. In three others starts in this event, his best result was a tie for ninth in 2016. The 2017 Players champion tied for eighth at Sanderson Farms, tied for 11th in the Fortinet and tied for 18th in the Zozo early this season.

5. Corey Conners, Canada – After making it all the way to the Tour Championship last year with eight finishes in the top 10, including seventh in the Players Championship, Conners has finished in the top 25 three times in four events this season, the best 11th in the Sony Open in Hawaii last week. He tied for 50th in the Desert in 2018 and missed the cut last season.

6. Sungjae Im, South Korea – Claimed his second PGA Tour victory early this season in the Shriners Children’s Open by four strokes by closing with 62 in addition to tying for ninth in the CJ Cup and tying for eighth in the Sentry TOC two weeks ago. Im’s best result in The American Express was a tie for 10th two years ago, and he also tied for 12th in 2019 and last year.

7. Russell Henley, United States – Will try to regroup after leading much of the way before losing to Hideki Matsuyama of Japan in a playoff at the Sony Open in Hawaii. Henley, who also tied for seventh in the Houston Open and tied for 21st in the Shriners Children’s Open, is 12th in the FedEx Cup standings. Best result in the California Desert was a tie for 49th in 2016.

8. Seamus Power, Ireland – A six-time winner as a pro, including the 2021 Barbasol Championship, Power tied for third last week in the Sony Open, tied for fourth in the RSM Classic and tied for 11th in the Mayakoba Classic and is 14th in the FedEx standings. His best finish in three starts in this event was a tie for 11th in 2018, and he tied for 21st the year before.

9. Tony Finau, United States – After claiming his first PGA Tour victory since the 2016 Puerto Rico Open by winning The Northern Trust during the playoffs last season, Finau tied for 19th in the Sentry TOC to start the new year two weeks ago. He posted four rounds in the 60s to finish solo fourth in The American Express last year after posting a tie for 14th the season before.

10. Talor Gooch, United States – Winner of the RSM Classic early this season in addition to tying for fourth in the Fortinet and tying for fifth in the CJ Cup, Gooch lost his lead in the FedEx Cup standings to winner Hideki Matsuyama after tying for 27th in the Sony Open in Hawaii. His best result at PGA West was fourth in 2019, he tied for 17th in 220 and tied for 21st last year.

1. Christiaan Bezuidenhout, South Africa – A seven-time winner as a pro around the world, Bezuidenhout was T-15 at Mayakoba, T-17 in the Sony Open. Makes debut in California Desert.

2. Joseph Bramlett, United States – Former Stanford All-American, who won 2021 Korn Ferry Tour Championship, is coming off a T-20 at the Sony Open after shooting 64 in the final round.

3. Adam Svensson, Canada – Three-time winner on the Korn Ferry Tour was T-7 in Sony Open last week after a T-22 in Bermuda Championship. T-18 in this tournament two seasons ago.