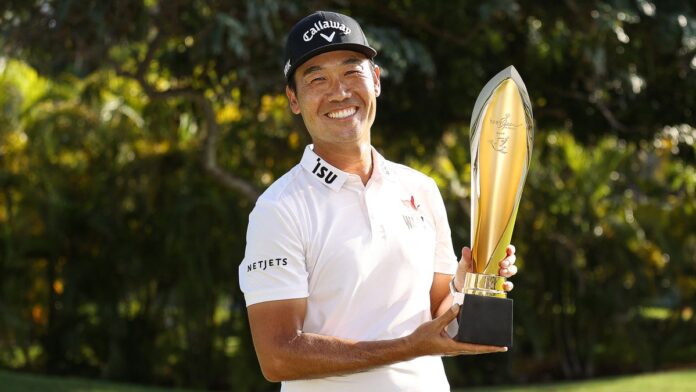 Eighth-ranked Bryson DeChambeau of Clovis would have been one of the favorites in the Sony Open in Hawaii at Waialae Country Club in Honolulu this week, but he was forced to withdraw because of a sore wrist.

That means that Cameron Smith of Australia, who captured the Sentry Tournament of Champions by holding off top-ranked Jon Rahm of Spain on Sunday, is the only player in the top 10 of the World Golf Rankings in the field for the second event on the PGA Tour season in 2020.

Kevin Na (pictured) is the defending champion in the event that starts Thursday at Waialae.

Smith, with his fourth PGA Tour victory, moved to No. 10 in the rankings and one of his titles came at Waialae in 2019, so several betting sites have made him the favorite to go back-to-back in the Hawaiian islands.

“The biggest thing (at Waialae) is just getting it in play, because I can just hit a lot of 2-irons out here and then I’m having short irons in, and I felt comfortable enough with those that I could hit my numbers,” Thomas said.

Els also won at Waialae in 2004 and Thomas took home a second title at Kapalua in 2020.

“I think there’s a lot (in Hawaii) that reminds us (Australians) of home,” said Smith, one of four Aussies to finish in the top 10 at Kapalua on Sunday. “Obviously, the mountains. The grass we play off is very similar to where I grew up.

“ … But I think Aussies play well when we’re relaxed, and we’re all relaxed here in Hawaii. Everyone is.”

Reigning Masters champion Hideki Matsuyama of Japan and 2012 U.S. Open winner Webb Simpson also are in the field this week, and Smith is hoping to join them as a major champion sometime soon.

Na, who passed up his senior year at Diamond Bar High to turn pro in 2021, won by a stroke over Chris Kirk last year for his fifth PGA Tour victory.

1. Hideki Matsuyama, Japan – The reigning Masters champion ranks fifth in the FedEx Cup standings early this season after winning the Zozo Championship at home in Japan, tying for sixth in the Fortinet Championship and tying for 13th last week in the Sentry TOC. Matsuyama tied for 12th in the Sony Open in Hawaii in 2019 with a closing 66 and tied for 19th last year.

2. Cameron Smith, Australia – Not only did Smith beat top-ranked Jon Rahm of Spain by one stroke in the Sentry Tournament of Champions on Sunday and climb to No. 10 in the world, he won the Sony Tournament of Champions over Brendan Steele with a par on the first playoff hole in 2020. The Aussie also tied for 18th at Waialae in 2018 and then tied for 22nd a year later.

3. Webb Simpson, United States – Playing in his first official PGA Tour event since tying for eighth in the RSM Classic in November, Simpson has had great success in the Sony Open in Hawaii without winning. The 2012 U.S. Open champion finished in the top 20 in his each of last seven starts at Waialae, including ties for fourth on 2017 and last year, and a tie for third in 2020.

4. Sungjae Im, South Korea – After winning the Shriners Children’s Open early this season, tying for ninth in the CJ Cup, tying for 19th in the Houston Open and tying for eighth in the Sentry TOC, Im ranks fourth in the early season FedEx Cup standings. His best result in the Sony Open in Hawaii was a tie for 16th three years ago, and he also tied for 21st one year later.

5. Kevin Na, United States – The defending champion in the Sony Open in Hawaii, Na claimed his fifth PGA Tour victory last year at Waialae by one stroke over Chris Kirk by shooting 61-65 on the weekend. He also tied for fourth at Waialae in 2008, tied for fifth the next year and tied for eighth in 2014. Last week, Na tied for 13th in the Sentry Tournament of Champions on Maui.

6. Marc Leishman, Australia – Coming off a tie for 10th in the Sentry TOC,  Leishman has gotten off to a strong start this season, also tying for third in the Shriners Children’s Open, tying for fourth in the Fortinet Championship and tying for 19th in the Houston Open. He tied for fourth last year at Waialae in addition to tying for third in 2019 and finishing solo fifth in 2014.

7. Kevin Kisner, United States – Kiz recorded his best finish in four official starts this season when he tied for eighth in the Sentry TOC last week by closing with 66-65 on the weekend. A four-time winner on the PGA Tour, he makes his 10th start in the Sony Open in Hawaii, with his best results ties for fourth in 2017 and 2010, and a tie for fifth in 2016, when he opened with 63.

8. Corey Conners, Canada – After finishing in the top 10 eight times last year without winning, Conners makes his first start of the new year after tying for 17th in the Sanderson Farms Championship and tying for 22nd in the RSM Classic early this season. He tied for third in the 2020 Sony Open in Hawaii by shooting 64-64 on the weekend, and tied for 12th last year.

9. Brendan Steele, United States – After opening the season with a tie for second in the Zozo Championship in Japan, Steele tied for 17th in the Sanderson Farms Championship and makes his first start of the year. This is his fourth appearance in the Sony Open in Hawaii and he lost on the first hole of a playoff to Cameron Smith two years ago before tying for fourth last year.

1. Maverick McNealy, United States – The former Stanford All-American finished T-s in the Fortinet Championship, T-11 at Mayakoba and T-19 in the Houston Open early this season.

4. Sepp Straka, Austria – Winner of the 2018 KC Golf Classic on the Korn Ferry Tour finished in the top 10 three times on the PGA Tour last year and also was T-25 in Sony Open in Hawaii.

5. Sahith Theegala, UnitedStates – FormerPepperdine All-American led much of the way and has finished T-8 in Sanderson Farms Championship, T-14 in the Safeway Open in rookie year.