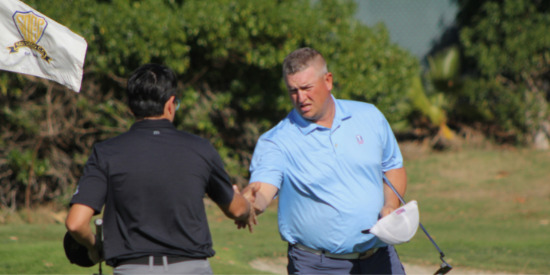 Engellenner made two birdies down the stretch to capture the Amateur.Com San Diego Amateur by two strokes over Bryce Kvick of Carmichael, Tyler Schafer of Long Beach, Kyle Daugherty of Irvine and Matthew Moss of San Diego at San Diego Country in Chula Vista.

The 44-year-old Engellenner, who won the Sacramento City Championship, the Dixie Mid-Master Championship and the Tony Lema Amateur last year, birdied the 14th and 16th holes to record a final round score of 4-under-par 68.

“It’s so critical that you’re in the correct pocket of the green if you’re going to make any score less than par,” Engellenner said of San Diego Country Club’s challenging greens. “I ran into a new circle of friends that played more of the state-level championships, specifically Domingo Jojola, Brett Viboch and Bobby Bucey.

“Playing against those guys every week and every tournament really showed me where I’m weak, and so I spent the last 18 months comparing myself to some of the best players in Northern California. That’s really sharpening your swords against those guys.”