Pettersen leads by one after 66 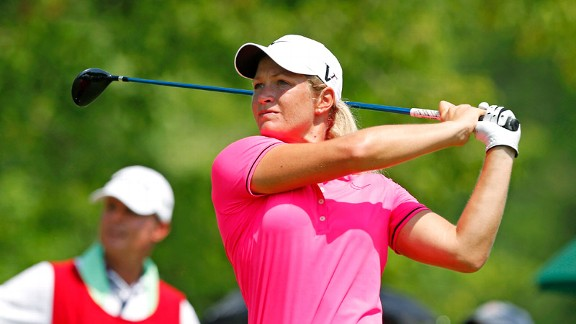 Suzann Pettersen of Norway, who can grab the No. 1 spot in the Rolex Women’s World Golf Rankings by winning this week, opened with a 6-underpar 66 to take a one-stroke lead over four players in the ISPS Handa Women’s Australian Open at Victoria Golf Club in Melbourne, Australia.

Pettersen, who missed the season-opening Pure Silk-Bahamas LPGA Classic because of a minor shoulder injury, collected nine birdies but also had three bogeys.

“It was good for the first round of the year,” said Pettersen, who is No. 2 in the rankings behind Inbee Park of South Korea, who is not playing in the tournament. “My ball-striking was good, but I had some three-putts.

” … I felt like it took me a couple of holes to kind of get comfortable. One thing is to go out and play in practice rounds and always have a second ball in the pocket to drop down if the first one didn’t kind of go where you want it to be, but today it’s all in. It’s a little different story when you have to put a scorecard in.

“But it was nice to kind of feel a little bit of a pump again, feel the heart and go for shots you want to hit, and see how you kind of execute them.”

Jessica Korda, who captured the LPGA Tour opener in the Bahamas, carded a bogey-free 65 and was tied with Hee Young Park of South Korea, Marion Ricordeau of France and Jaclyn Sweeney, who helped Arizona State claim the 2010 NCAA Championship.

Lydia Ko, the 16-year-old sensation from New Zealand, shot 68 and was tied for sixth with nine others, including Paula Creamer of Pleasanton, Azahara Munoz of Spain and Sydnee Michaels of Temecula and UCLA.

Lexi Thompson opened with a 70 to tie for 25th and Cheyenne Woods, who won the Volvik RACV Australian Ladies Masters last week, was 2-under through 11 holes before making bogeys on four of the next five holes and wound up at 74 to tie for 100th.