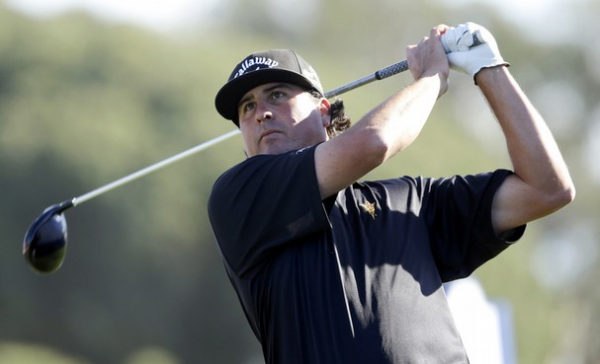 Pat Perez carded a 4-under-par 68 and was tied for the lead with Danny Lee of New Zealand and Andrew Loupe when the first round of the Valero Texas Open was halted by darkness at TPC San Antonio in San Antonio, Texas.

Perez, out of San Diego and Arizona State, waited out a morning fog delay of more than two hours and then got hot with the putter late in his round, finishing with three consecutive birdies that included a 17-foot putt on the 18th hole.

“I was in the first group of the day and mine was the first ball in the air, but we had to wait for the fog to lift,” said Perez, whose only PGA Tour victory came in the 2009 Bob Hope Classic. “So I went back and had a second breakfast, and talked with some of the guys. It wasn’t too bad.

” … I went back to putting cross-handed. I would like to putt conventionally, but I wasn’t doing too well with that. So I switched back at Torrey Pines and started to putt well again. I was rolling it pretty good (in the first round) and made a few.”

The 23-year-old Lee, whose only pro victories came in the 2009 Johnnie Walker Classic on the European Tour and the 2011 WNB Golf Classic on the Web.com Tour, birdied four of the last five holes to catch Perez after recording only one birdie on the front nine.

Loupe, a 25-year-old who earned his PGA Tour card by finishing 32nd on the Web.com Tour money list last year with a tie for sixth in the Tour Championship, recorded six birdies and was still on the course at 4-under through 11 holes when the horn sounded.

Will Mackenzie, playing alongside Perez, recovered from a double-bogey 6 on the ninth hole to card a 69 and was tied tie for fourth with Seung-Yul Noh of South Korea, Cameron Beckman and Chesson Hadley.

Justin Hicks was 3-under after 15 holes when darkness came, and Miguel Angel Carballo of Argentina was 3-under through 14.

Phil Mickelson, playing for the first time in three weeks and without a top-10 finish this season, was tied for 135th after opening with a 77 that included a double-bogey 6 when he three-putted from 11 feet on his final hole of the day, No. 9.