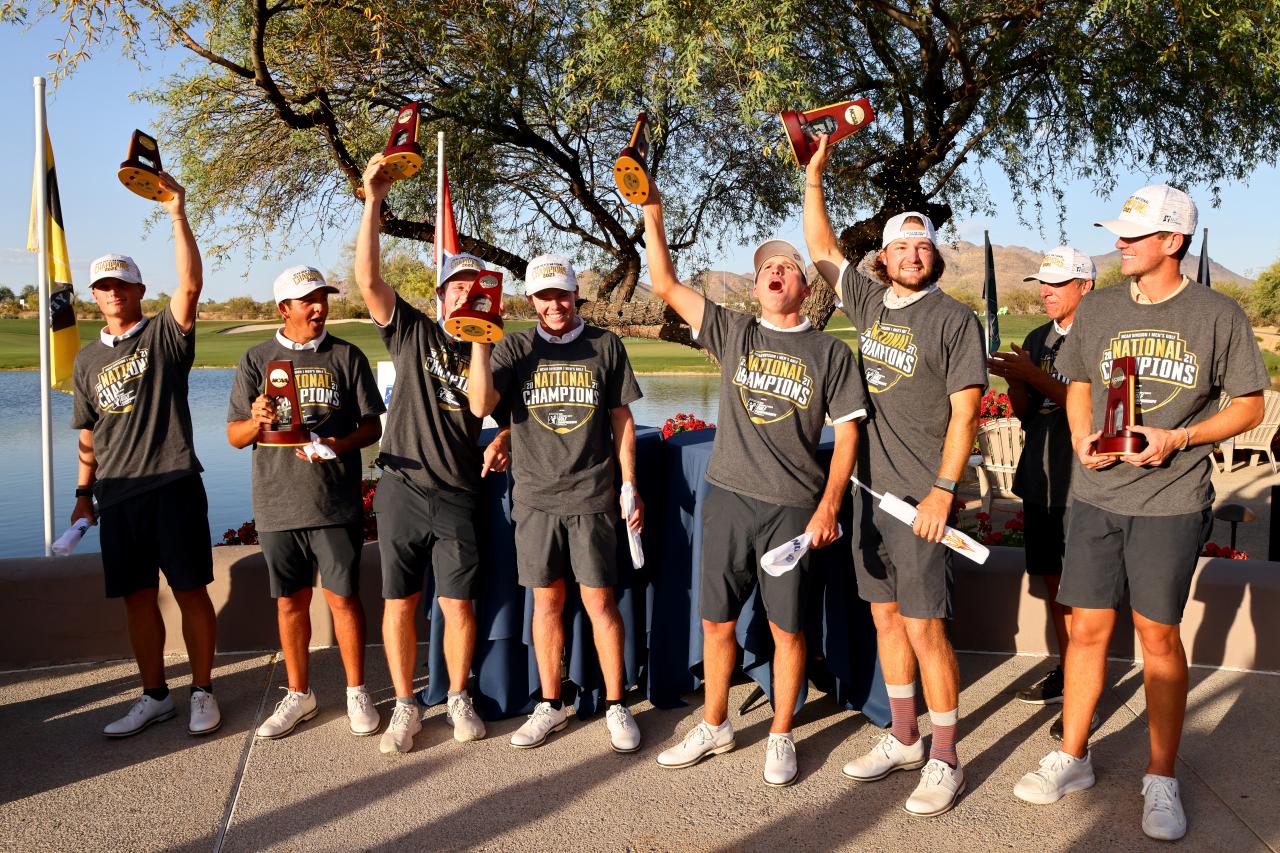 Pepperdine captured its second NCAA Men’s National Golf Championship with a 3-2 victory over Oklahoma in the match-play final at Grayhawk Golf Club in Scottsdale, Arizona.

The Waves were No. 1 in the nation last season but didn’t get a chance to play for the national title, which they last won in 1997, because much of the season was canceled because of the Coronavirus Pandemic.

“I’m so proud of these guys,” Pepperdine Coach Michael Beard (pictured with trophy). “We didn’t get a chance to do this last year, but we came back this season better than ever. It means so much to our fans, our program and our university. “I’m so glad my Dad was able to be there and see this.

“We proved that we can play with the big boys.”

Clay Feagler, a redshirt senior from Laguna Nigel, provided the Waves with the winning point when he pulled out a 1-up victory over Ben Lorenz of Oklahoma by halving the 18th hole with a four-foot par putt.

Left-hander Joe Highsmith, a junior from Lakeland, Wash., gave Pepperdine a 4-and-3 victory over Garret Reband, and William Mouw, a sophomore from Chino, beat Quade Cummins, also by 4 and 3.

Jonathan Brightwell of Oklahoma defeated Dylan Menante, a sophomore from Carlsbad, 1 up, and the Sooners’ other point came when Logan McCallister downed Joey Vrzich, a senior from El Cajon, also by 1 up.

“It’s just surreal to have to come down to No. 18 and win the final point here,” said Feagler, who could have left Pepperdine after last season. “The last three holes were so unnerving. I didn’t play all that well a year ago and wanted to come back and make up for it, but this is just unreal.”

Pepperdine was ninth after the third round of stroke-play qualifying and had to climb into the top eight to have a chance to play for the National Championship, but rallied with a big final day to finish third.

In the quarterfinals of match play, the Waves defeated Florida State, 3-1-1, and in the semifinals they downed Oklahoma State, 3-0-2.

Oklahoma took out Illinois, 3-2, in the quarterfinals, and upset top-seeded Arizona State, also by 3-2, in the semifinals.