Morikawa Leads Stormy Memorial by 1 at 66 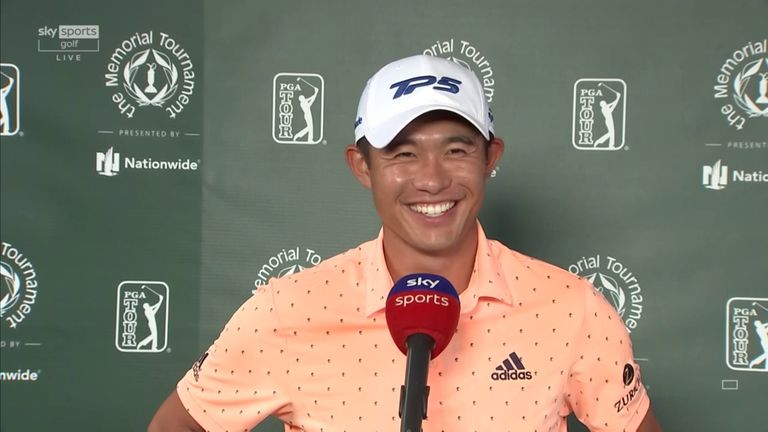 Collin Morikawa won at Muirfield Village Golf Club last season and would love to do it again on Jack Nicklaus’ renovated course.

The 24-year-old Morikawa shot 6-under-par 66 to take a one-stroke lead over Adam Long after the first round of The Memorial Tournament, which was delayed twice because of thunderstorms before being halted for the day early in the evening at Dublin, Ohio.

There were 60 players still on the course when the end came, and six others had yet to tee off, so they will return Friday morning to complete the first round before the second round begins.

“(Muirfield Village) fits my eye off the tee a lot,” said Morikawa, who won the Workday Charity Open, which was moved to Nicklaus’ course last July because of the Coronavirus pandemic, which caused changes in the PGA Tour schedule. “There’s only a couple tee shots where I might not be able to hit my cut as well as I want to.

“But other than that, if I keep it in the fairway, I feel like I’m hitting kind of a lot of 9-irons, 8-irons and 7-irons, and that’s kind of what I’ve based my game on the past couple years. When I’m able to put those irons in my hands I feel like I can attack pins, I can be smart and give myself maybe some closer birdies than other guys can. Obviously, we rolled in a few today and just got to keep that up.”

The sixth-ranked Morikawa, the 2020 PGA champion from La Canada Flintridge and Cal, collected seven birdies against a single bogey at No. 18, rattling off three straight birdies through No. 3 while finishing on the front nine.

Long, whose only PGA Tour victory came in the 2019 Desert Classic, made four birdies on the first seven holes to kick-start his 67, while fifth-ranked Xander Schauffele of La Jolla and San Diego State had five birdies and a bogey at No. 8 in his 68, and is tied for third with Nick Taylor of Canada, who chipped in from 34 feet for at eagle at No. 5, Bo Hoag and Rafa Cabrera Bello of Spain.

Earlier in the week, Long said he had a surprise meeting with Nicklaus during a practice round.

“It was pretty surreal,” said Long, whose only other pro victory came in the 2011 Woodcreek Open in the NGA Hooters Tour. “We get to 14 green and we look up, I had to do kind of a double look, and it was Mr. Nicklaus sitting in a golf cart there on 15 tee just waiting for us.

“So we finished 14 and walk over and he’s like: ‘Hey, I just wanted to see somebody play 15, I hadn’t seen it played yet.’ And I’m like: ‘Oh, boy.’ So it got my nerves pumping there pretty good early in the week for sure. But we played that hole and he followed me all the way up, hit a bunch of chips around the green and talked about the changes to that hole. And then he went over to 16 as well and we probably hit three tee shots there on 16.

“So it went by quick. Obviously, (he’s) a hero of mine and being here at the Memorial Tournament having Mr. Nicklaus watch you play golf is, it’s a pretty awesome experience.”

Second-ranked Justin Thomas capped his 69 with a seven-foot birdie on the ninth hole and is tied for seventh with defending champion and third-ranked Jon Rahm of Spain, Max Homa of Valencia and Cal, Brendan Steele of Idyllwild and UC Riverside, Rickie Fowler of Murrieta, reigning Open champion Shane Lowry of Ireland and Christiaan Bezuidenhout of South Korea.

Fourth-ranked Bryson DeChambeau was 2-under after three holes in a tie for 14th, ninth-ranked Patrick Reed was in a tie 20th at 71, and eighth-ranked Rory McIroy was 1-over after two holes and tied for 61st.