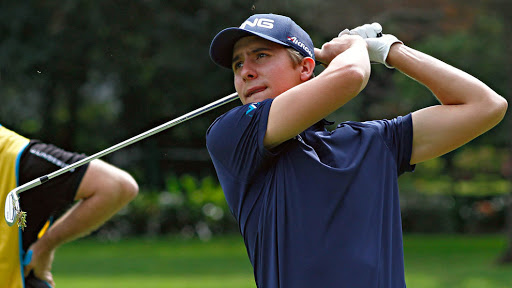 Carlos Ortiz of Mexico finished well over an hour ahead of the rest of the leaders and at the end of the day he also was in front of most of them on the leaderboard.

The 29-year-old Ortiz (pictured) shot a 4-under-par 66 that was the low score of the day by two strokes and is tied for the lead with Patrick Reed after three rounds of the Farmers Insurance Open on the South Course at Torrey Pines Golf Course in La Jolla.

“I hit it in the fairway, drove the ball really nicely today,” said Ortiz, who claimed his first PGA Tour victory in the Vivint Houston Open two months ago. “I had some good shots into the par-3s and made some putts, too.

Ortiz, who won three times in 2014 on what is now the Korn Ferry Tour, collected six of his seven birdies on the back nine against a bogey on No. 11, and recorded a 54-hole score of 10-under 206.

Reed, who held a four-stroke lead at the turn, made four bogeys on the back nine but sank a 12-foot birdie putt on the last hole to cap a 70 and regain a share of the lead.

“On the front nine, I just made a lot of putts,” said Reed, who survived a question about a possible rules violation on the 10th hole. “The back nine plays more difficult, especially 11, 12 and 13. The back is just tough.

“I just got on the wrong side of the golf course a few times and had to scramble, but it was good to finish with a birdie.”

Second-ranked Jon Rahm of Spain shot 72 and is two shots back in a tie for third with Sam Ryder, who finished at 70, Adam Scott of Australia and Lanto Griffin, who both totaled 72, and second-round leader Viktor Hovland, who salvaged a 73 with birdies on the last two holes.

Seventh-ranked Rory McIlroy of Northern Ireland posted a 70 and is three down in a tie for eighth with Sam Ryder, who wound up at 69, Will Zalatoris, who birdied the last hole for a 70, and Ryan Palmer, who made only one birdie in a 73.

Sixth-ranked Xander Schauffle of La Jolla and San Diego State carded a bogey-free 68 and is tied for 12th, and defending champion Marc Leishman of Australia is tied for 27th after a 72.