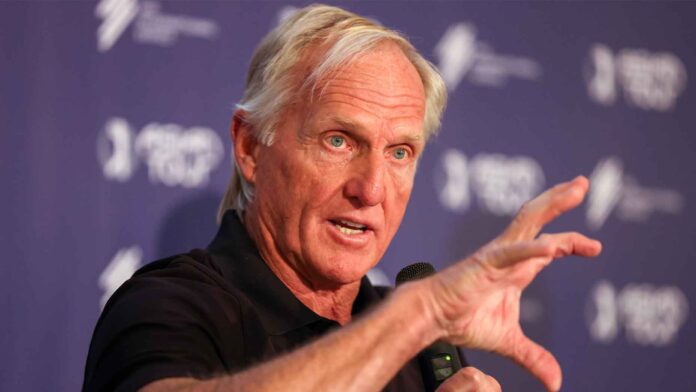 Even though no golfers have publicly committed to the LIV Golf Invitational, the Saudi-backed organization headed by golfing great Greg Norman of Australia has announced a series of eight tournaments for this year, all but one conflicting with a PGA Tour event.

The first LIV tournament on the schedule is set for Centurion Golf Club in London on June 9-11, followed by four in the United States—at Pumpkin Ridge Golf Club in Portland, Ore., on July 1-3; at Trump National Golf Club in Bedminster, N.J., on July 29-31; at The International in Boston on Sept. 2-4, and at Rich Harvest Farms in Chicago on Sept. 16-18.

“I want golf to grow, players to have additional opportunities, and fans to have more fun,” LIV Golf Investments CEO Norman said in a release. “My mission is to help the game reach its full potential and we know the role of golf as an entertainment product is critical to overall participation in the sport. In many ways, we are a start-up. We have a long-term vision and aim to grow. I believe we have a very bright and exciting future.

“ … Will they (PGA Tour stars) all come in the beginning? Heck no. We understand that. But they have to determine for themselves as independent contractors that they can play both and do both. This is 100 percent additive. There is nothing wrong with playing both tours. I encourage them to do that.”

LIV Golf Invitational is offering a $250 million total prize money for its eight tournaments, all 54-hole events with no cuts, shotgun starts and purses that will pay $20 million for the individual portion, $5 million for the team portion, and a season-ending event that will have a $30 million purse.

Players such as Adam Scott of Australia, Lee Westwood of England, Jason Kokrak, Ian Poulter of England and especially Phil Mickelson initially expressed interest in the new tour, but there has been mostly silence since Commissioner Jay Monahan of the PGA Tour indicated players would be suspended if they played in any of the LIV tournaments.

There was a major backlash to some of Mickelson’s comments and the six-time major champion has taken a sabbatical and said little in recent weeks.

Other top players such as top-ranked Jon Rahm of Spain, second-ranked Collin Morikawa of La Canada Flintridge and Cal, third-ranked Viktor Hovland of Norway, seventh-ranked Rory McIlroy of Northern Ireland, eight-ranked Justin Thomas, Brooks Koepka and others have claimed they will remain loyal to the PGA Tour.

“I am grateful for the strong support our top players have shown recently and publicly, and I’m extremely proud that we’ve turned the conversation around to focus on what we do best: delivering world-class golf tournaments with the best players to the best fans, all while positively impacting the communities in which we play,” Monahan said. “We are and we always will be focused on legacy, not leverage.

“ … Our PGA Tour rules and regulations were written by the players, for the players. “They’ve been in existence for over 50 years. I’m confident in our rules and regulations, my ability to administer them, and that’s my position on the matter. I can’t say it any more clearly. We’re confident in our position and we’re going to keep moving forward as a PGA Tour and focus on the things that we can control.”

The other tournaments on the LIV Golf Invitational are set for Stonehill Golf Club in Bangkok, Thailand, on Oct. 7-9; Royal Greens Golf Club in Jeddah, Saudi Arabia, on Oct. 14-16, and a Team Championship at a site yet to be determined on Oct. 28-30.