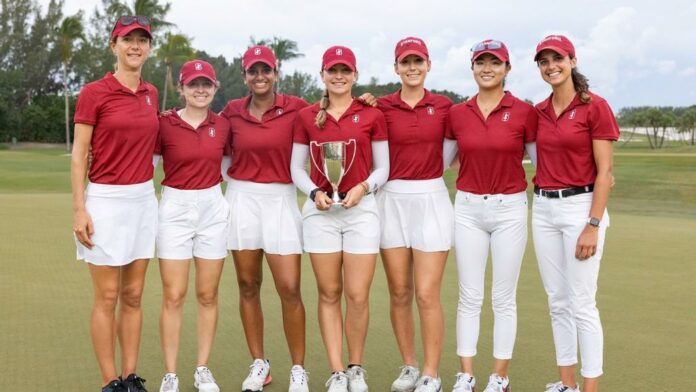 Top-ranked Stanford, the defending NCAA champion, rolled to a 4-1 victory over No. 2 Wake Forest to claim the Women’s Division title in the Jackson T. Stephens Cup at Seminole Golf Club in Juno Beach, Fla.

Stanford, coached by Anne Walker, led almost from the start as freshman Megha Ganne knocked off Wake Forest senior Rachel Kuehn, the stroke-play medalist, 1 up, after leading the opening match most of the way. Ganne won the second and third holes while building a 3-up lead through 13 holes, but Kuehn won the next three holes to tie the match. then Ganne made winning par on the 17th hole to regain the lead and won when both golfers birdied No. 18.

Rachel Heck, a Cardinal junior who captured the 2021 NCAA Women’s Individual Championship, lost two the first two holes but pulled even by winning Nos. 3 and 6 against  Wake Forest sophomore Carolina Lopez-Chacarra of Spain, who regained the lead by winning the 10th hole. However, Heck won the 12th, 14th and 17th holes en route to a 3-and-1 victory.

Wake Forest earned its only point of the match when junior Mimi Rhodes of England rallied after losing the first two holes to defeat Stanford junior Sadie Englemann, 2 and 1. Rhodes tied the match by winning Nos. 4 and 6, and never trailed again, moving ahead with a victory on the ninth hole.

Top-ranked Rose Zhang, a Stanford sophomore from Irvine, lost the first hole but got even on No. 2 and never trailed again while beating Curtis Cup teammate Emilia Migliaccio, a Wake Forest senior, 3 and 2. The match was tied through eight holes, but Zhang went ahead to stay by winning the ninth hole, and built on her lead by winning the 10th and 13th holes.

Brooke Seay, a senior from San Diego, never trailed while claiming the final point for Stanford by turning back turning back Lauren Walsh, a Wake Forest senior from Ireland, 1 up. Seay was 1 up through nine holes before winning the 10th hole and held off Walsh down the stretch.

The Cardinal women play again next weekend, Oct. 21-23, by playing in the Stanford Intercollegiate, hosted by Dr. Condoleezza Rice, at Stanford Golf Course.