NCAA Champion Pepperdine, Highsmith Both Ranked No. 2 After the Fall Season 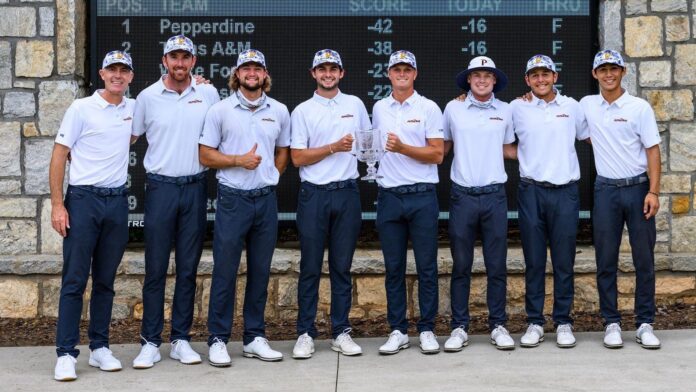 Joe Highsmith of Pepperdine is ranked No. 2 and the defending NCAA champion Waves also came in second in the final Golfweek/Sagarin national college men’s golf rankings after the 2021 Fall Season.

The Waves, who beat Oklahoma for the second national men’s golf title in school history last June at Grayhawk Golf Club in Scottsdale, Ariz., won the Golf Club of Georgia Collegiate in addition to finishing third at the East Lake Cup in Atlanta, tying for fifth in the Colonial Collegiate Invitational at Fort Worth, Texas, and tying for eighth in the Fighting Illini Invitational at Olympia Fields, Ill., during the Fall.

Pepperdine will resume its bid to repeat as national champion when it plays host in the Southwestern Invitational Collegiate at North Ranch Country Club in Westlake Village from Jan. 24-26.

Highsmith, a senior from Lakewood, Wash., claimed his second college title in the Golf Club of Georgia Collegiate, finished first in the match play portion of the East Lake Cup, was fifth in the Colonial Collegiate Invitational and tied for eighth in the Fighting Illini Invitational while posting a stroke average of 69.80 during the Fall.

Last season, Highsmith captured his first college title in a playoff at the Western Intercollegiate among his seven top-10 finishes, posted a 70.76 stroke average, went 3-0 in match play as the Waves claimed the NCAA title at Grayhawk, was selected first team All-West Coast Conference and honorable mention All-American.

Chris Gotterup of Oklahoma is ranked No. 1 ahead of Highsmith, who is followed by Trent Phillips of Georgia, J.M. Butler of Auburn and RJ Manke of Washington, who played for Pepperdine last season before transferring.

Rounding out the top 10 are Sam Bennett of Texas A&M in sixth, followed by Mat Fernandez De Oli of Arkansas, Jackson Suber of Mississippi, Ryan Gerard of North Carolina and Cameron Sisk of Arizona State.

In the team rankings, only Oklahoma is ahead of Pepperdine, which is followed by Arizona State, Texas A&M, North Carolina, Oklahoma State, Texas, Stanford, Arkansas and Wake Forest in the top 10.