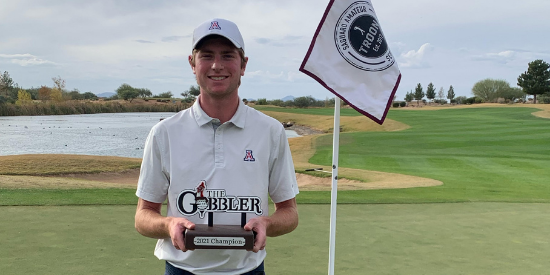 Ryan Meyer of Oakdale sank a 35-foot birdie putt on the first playoff to defeat his University of Arizona teammate Santeri Lehesmaa and win the Gobbler Amateur at Sewailo Golf Club in Tucson, Ariz.

The tournament is part of the Troon Saguaro Amateur Series.

“I got off to a hot start and was able to hang on the tough holes on the back,” said Meyer, who also won the 2018 Northern California Junior Amateur Championship. “The win means a lot because it shows the hard work I have been putting in this Fall.”

Meyer birdied seven of the first 10 holes in the final round and after making two bogeys, finished with four straight pars for his 66, while Lehesmaa held the lead until making a bogey on the 17th hole and finished at 69.

Defending champion Scott Rescigno of Reno and New Mexico State struggled to a tie for 51st at 77-72-81—230.