Munoz leads Greenbrier by 2 going to final round 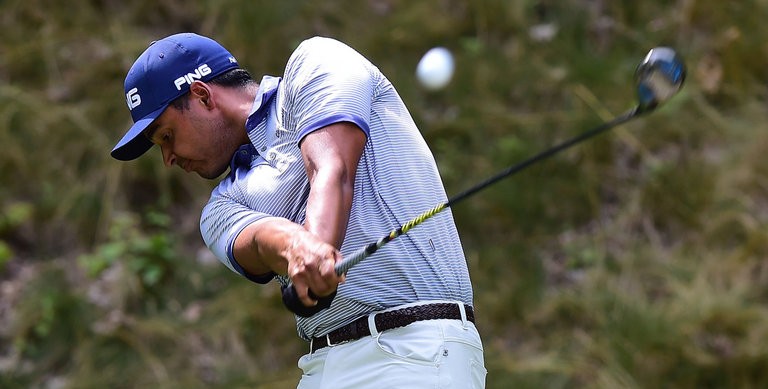 Sebastian Munoz became the third straight player to lead after each of the first three rounds in a PGA Tour event, but will he finish like Jordan Spieth or David Lingmerth?

The 24-year-old rookie from Colombia shot 2-under-par 68 to take a two-stroke lead over Robert Streb heading into the final round of the Greenbrier Classic on the Old White TPC Course at the Greenbrier Resort in White Sulphur Springs, W.Va.

Two weeks ago, Spieth hung on to win the Travelers Championship, but last week Lingmerth stumbled in the final round and tied for fifth in the Quicken Loans National.

“I try to play boring golf,” said Munoz, whose best finish this season is a tie for 37th in the Valero Texas Open. “I try to hit the fairway and hit the greens. Even though I try, I just seem to put myself into some trouble and then try to make something happen and then kind of get on a good run.

” … I think I had a good round today by the way I just hit the ball from the tee again. A lot of missed fairways in the first nine. I think I was getting a little too quick, out of rhythm. Then we kind of managed to settle in with a couple clutch putts, save par, and good chips.
“After that, good surprise that the putter was hot … and we managed to save the day.”

Munoz, who won the 2016 Club Colombia Championship on the Web.com Tour en route to earning his PGA Tour card, has a 54-hole total of 196.

Streb, whose only victory on the circuit came in the 2014 RSM Classic, eagled the 12th hole on his way to a 65, while Xander Schauffele of San Diego and Jamie Lovemark of Rancho Santa Fe and USC each had 66s to share third, three shots back.

Davis Love III, continuing to hang with the kids at age 53, posted a 68 and is four down in a tie for fifth with Russell Henley, who also had a 68, and Kelly Kraft, who totaled 67.

Danny Lee of New Zealand, the 2015 Greenbrier champion, carded a 70 and is another stroke back in a tie for eighth with Tony Finau, who recorded a 67, and Nick Taylor of Canada, who came in at 69.