Munoz and Hadley Tied for John Deere Classic Lead at 63 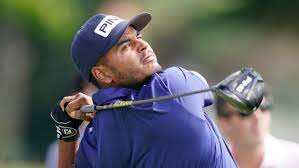 Sebastian Munoz of Colombia and Chesson Hadley both have won once on the PGA Tour and are looking for more.

Munoz (pictured) and Hadley both shot 8-under-par 63 to tie for the lead, one stroke ahead of three others golfers, after the first round of the 50th edition in what is now the John Deere Classic at TPC Deere Run in Silvis, Ill.

“It was a really solid round,” said Munoz, who won the 2019 Sanderson Farms Championship. “I hit the ball really good all day. I got hot with the putter coming in. I wasn’t making a lot on the front nine, so it was nice to see them go in on the back. You know, overall solid golf, make the putts, hit the shots.

“You know, I think it was a tough start of the 2021. My swing wasn’t where I wanted it to be, so it took a lot for me and my team to kind of get back to where we want to be, hitting the ball a little further … controlling my ball flight, kind of seeing my windows, and I think we’ve done that. We’ve put in the work, and now it’s starting to pay off.

“Last week in Detroit, I played three good days, never really got hot, and then Sunday had a bad round, and I didn’t let that kind of keep me down. I just kind of stayed positive.

I was playing good, so I just kind of came in here, no expectations and see what happens, and 8-under, so I’ll take it.
Munoz, who had three other pro victories in Colombia, had three birdies and a bogey on the front nine, before capping his round by collecting six birdies on the back nine, making five in a row at the end.

Hadley, who won four times in what is now the Korn Ferry Tour, had four birdies on each nine in a bogey-free round.

“I was comfortable early and was able to get out of the gates with a birdie,” said Hadley, whose only PGA Tour victory came in the 2014 Puerto Rico Open. “I hit some really nice shots kind of right off the bat and then I saw a couple putts come off the way I wanted it to, and it was just kind of all clicking today, which was great.

“I thought the golf course was probably in as good a shape as I’ve ever seen it. I don’t know if I’ve played around here where the ball is like really kind of bounding in the fairways. I was walking down No. 10 and you could feel the firmness in your feet.

“I know it looks like there might be a chance of rain, so hopefully that can stay away from us, but it was just an awesome day, great way to get the tournament started for sure.”

Left-hander Hank Lebioda, who has finished in the top five in his last two starts, was tied for the lead until making his only bogey while finishing on the ninth hole and shares third after a 64 with Camilo Villegas of Colombia, who sank a six-foot eagle putt on the second hole, and Chez Reavie, who both played bogey free.

Ryan Moore, who won the NCAA Championship for UNLV, the U.S. Amateur and the U.S, Amateur Public Links titles in 2004, is solo sixth after a 65, while Cameron Champ of Sacramento shot 66 and is tied for seventh with Michael Gellerman, Luke List, Doug Ghim and Kevin Tway, who sank a nine-foot eagle putt on the 14th hole.

Dylan Frittelli of South Africa, the defending champion who won the John Deere Classic in 2019, shot 68 and is tied for 29th, while Steve Stricker, the U.S. Ryder Cup champion who has won this tournament three times, is tied for 75th at 70.

The John Deere Classic was canceled last year because of the Coronavirus pandemic.