Matsuyama holds on for fourth win in five starts 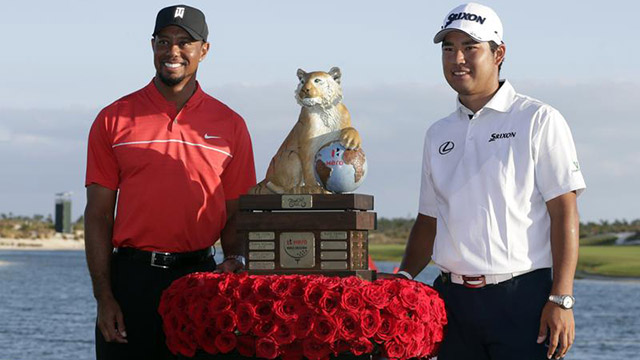 The talk all week was about the return of Tiger Woods, but in the end it was all about Hideki Matsuyama of Japan.

Matsuyama struggled a bit after starting the final round with a seven-stroke lead, but shot 1-over-par 73 and held on to win the Hero World Challenge by two strokes over Henrik Stenson of Sweden at Albany Resort in New Providence, Bahamas.

After winning his third straight tournament and fourth in his last five starts with a score of 18-under 270, Matsuyama received the trophy from tournament host Woods.

“I can’t say that I played well today, but I did win Tiger’s tournament,” said the 24-year-old Matsuyama, who deflected talk that he might be the best player ever from Japan. “And what a great honor that is.”

” … There’s been some great golfers in Japan. Just to name a few, Jumbo Ozaki, Isao Aoki, Shigeki Maruyama, Tsuneyuki Nakajima. To follow in their footsteps is a great honor. I’m grateful for all of their help. But to answer your question, I’m not the greatest golfer from Japan.

Stenson, who captured the Open Championship in July at Royal Troon, closed with a 68, while Rickie Fowler of Murrieta, Calif., shot 69 and finished five shots back in a tie for third with Matt Kuchar, who totaled 70, and US. Open champion Dustin Johnson, who finished at 71.

Defending champion Bubba Watson posted a 67 and was seven strokes behind in a tie for sixth with Jordan Spieth, who carded a 70, and Brandt Snedeker, who came in at 72.

Woods, playing for the first time in 16 months following two back surgeries, closed with a 76 that included three double bogeys, but overall was pleased even though he finished 15th in the field of 18, including Justin Rose of England–who withdrew after one round because of a back injury.

“Getting back to this point is beyond anything that I’ve ever experienced in my lifetime,” said Woods, who plans to play a full schedule on the PGA Tour next year. “Big picture? It feels good. It feels good to be back out here playing again, competing and trying to beat the best players in the world. I missed it. I love it.”

Woods said one goal is to make the 2017 United States team for the Presidents Cup.