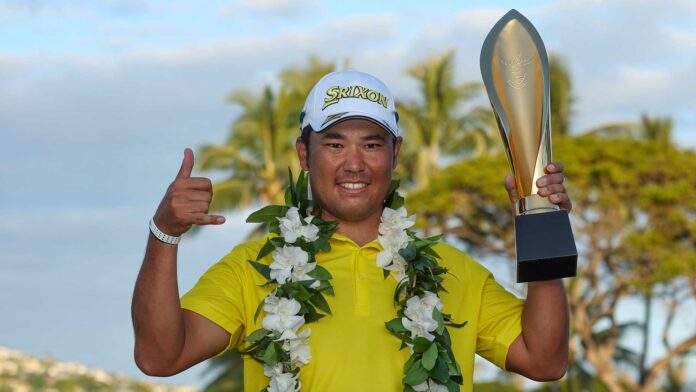 Hideki Matsuyama of Japan showed why he is the reigning Masters champion.

The 29-year-old Matsuyama came from five strokes down on the back nine and forced a playoff with a birdie on the final hole of regulation before sinking an eagle putt from inside three feet on the first extra hole beat Russell Henley in the 57th Sony Open in Hawaii at Waialae Country Club in Honolulu.

“Russell was just playing great and I was five behind at the turn, but I just got on a roll and it’s great that it turned out this way,” said Matsuyama, who also captured the Zozo Championship in Japan in October and won for the third time in his last 17 events to give him 17 pro victories, including eight on the PGA Tour.

“I’m really happy to win here because this is the first tournament that a player from Japan, Isao Aoki won (with a hole-out birdie on the 72nd hole in 1983) on the PGA Tour. To win here where he did, I’m just over the moon.”

Matsuyama closed with a second straight bogey-free, 7-under-par 63, rallying with four birdies on the back nine to record a winning score of 23-under 257 to catch Henley on the final hole of regulation.

Henly, who led from the second round until the final hole, missed a 10-foot birdie putt on No. 18 that would have given him the victory and wound up with a 65 after shooting 5-under 29 with an eagle and four birdies on the front nine.

However, he didn’t have a birdie on the back and made a bogey on the playoff hole.

“I thought I made that putt on the last hole of regulation to win the tournament and it’s disappointing to lose,” said Henley, who has won three times on the PGA Tour including this tournament in 2013. “I thought I played well enough to win today, especially on the front nine.

“I hit a few loose shots on the back nine, but still was right there. You have to give it to Hideki, who hit some great shots when he really needed them, but it stings. I was in it the entire time and really thought I was going to win today.”

Kevin Kisner birdied the first three holes to kick-start a bogey-free 64 and was four strokes back in a tie for third with Seamus Power of Ireland, who birdied the last two holes for a 65, while Michael Thompson collected four birdies on each nine in a 63 to finish five shots behind in a tie for fifth with Lucas Glover, who sank a seven-foot eagle putt at No. 9 in a 64.

Keith Mitchell made seven birdies in a bogey-free 63 and wound up six strokes back in a tie for seventh with Russell Knox of Scotland, who shot a bogey-free 65, Matt Kuchar, the 2019 Sony Open champion who finished at 67, and Adam Svensson of Canada, who also had a 67.

Kevin Na of Diamond Bar, the defending champion and first-round leader at 61, tied for 20th after a 68, while Talor Gooch lost his lead to Matsuyama in the FedEx Cup standings by shooting 69 to tie for 27th.