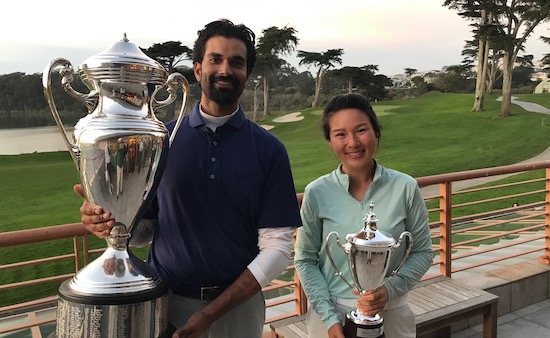 The 28-year-old Mahal (pictured left), who played at UC Santa Barbara, turned back Justin Polk of Santa Clara with a par on the 38th hole of their scheduled 36-hole final.

“It’s been in my mind to win this tournament for quite a few years but I’ve fallen short in the past,” said Mahal, who recently barely failed to reach Stage II of Korn Ferry Tour qualifying. “I’m excited the way my season finished and to cap it off with a win here is really special.

“My short game kept me in the match the entire day and it’s something to fall back on when your long game isn’t where you want it to be.”

Mahal, the second overall seed, fell 2 down after the morning 18 when Polk birdied the 17th hole and won No. 18 with a par to gain the largest lead of the match, but Mahal stayed that close with a brilliant par save out of the trees on the 20th hole.

The match was even again after Mahal took the 21st and 24th holes, and he went 1 up with a conceded birdie at No. 25 before Polk pulled even again with a par on the next hole.

Mahal barely missed a 10-foot birdie putt on the first extra hole that would have ended the match, and then hit is drive on the final hole into the trees but made a great recovery shot to within 25 feet to set up his winning par putt from two feet.

Polk failed to get up-and-down for par after missing the green, missing an eight-foot par putt.

“I had a nice opening and it was a fairly basic punch shot with a six-iron,” Mahal said. “It was a shot I’ve had before so I was comfortable with it.”

Rojanapeansatith (pictured right), a native of Thailand who graduated from USF in August, twice relinquished three-hole leads in the women’s championship match against Choi, 16, of Murrieta but made birdies on the 34th and 35th holes to win, 2 up.

The match was tied when Rojanapeansatith drove to within 30 yards of the green on the par-4 34th hole and nearly holed her second shot but settled for a birdie and a 1-up lead. She hit her tee shot from 118 yards on the par-3 35th hole to with 15 feet and made the birdie putt to claim the victory.

“It was a real grind for me all day,” said Rojanapeansatith, who will play on the Symetra Tour after the first of the year. “We both played really well and Kylee had a lot of good looks for birdies and pars.

“I only played Fleming (the nine-hole, par-3 course at Harding Park before this tournament) and hit balls on the range. It’s a great course and is very challenging.”