Lovemark tied for lead in Houston 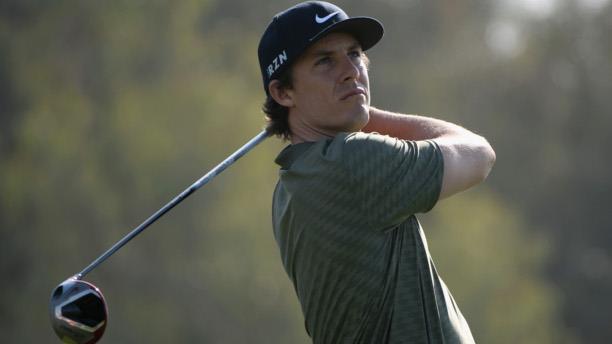 Jamie Lovemark posted a 2-under-par 70 and was tied for the lead with Jim Herman heading to the final round of the Shell Houston Open at the Golf Club of Houston in Humble, Texas.

The 28-year-old Lovemark (pictured), who was tabbed for stardom after winning the 2007 NCAA Championship for USC but has been slowed by injuries, birdied three holes in a row through No. 4 to get to the top and then was steady the rest of the way–making pars on the last seven holes.

“I remember I couldn’t really bend over to get in my setup, and I knew that day I was trouble,” Lovemark recalled of shooting 80 in the first round of the 2011 Shell Houston Open before withdrawing because of a back injury that required surgery. “So yeah, it feels great to be playing at a course where I couldn’t even compete five years ago. I’ve come a long ways, and hopefully I’ll be able to win it, and that would be a cool story.

” … My confidence is good. I’ve got to keep doing what I’ve been doing. It’s going to be a tough battle tomorrow. It’ll be a shootout.”

Herman, 38, a journeyman who has never won on the PGA Tour, holed a seven-foot birdie putt on the 17th hole on his way to a bogey-free 67.

“I putt the ball in the right place all day,” said Herman, whose only pro victory came in the Moonah Classic on what is now the Web.com Tour. “I’m really glad about the way I’m hitting the ball and putting. I had had so many birdie chances. I feel like I’m really rolling the ball well.

“There’s a lot to play for tomorrow. I had a couple of good par saves, especially on the last hole. I’m committed to going to the first tee (Sunday) and hitting that first fairway. I’ve got to try to not put any extra pressure on myself.”

Henrik Stenson of Sweden, No. 7 in the World Golf Rankings, carded a 66 and was one stroke back in a tie for third with Russell Henley, who had a second straight 68, and world No. 9 Dustin Johnson, who sank an 18-foot eagle putt on the eighth hole in his 70.

Roberto Castro made bogeys on two of the last three holes in a 70 that left him another stroke behind in solo sixth, while Charley Hoffman of Poway, who led after each of the first two days, struggled to a 74 and was three shots back in a tie for seventh with Kyle Reifers, who totaled 68, and Chez Reavie, who came in at 72.