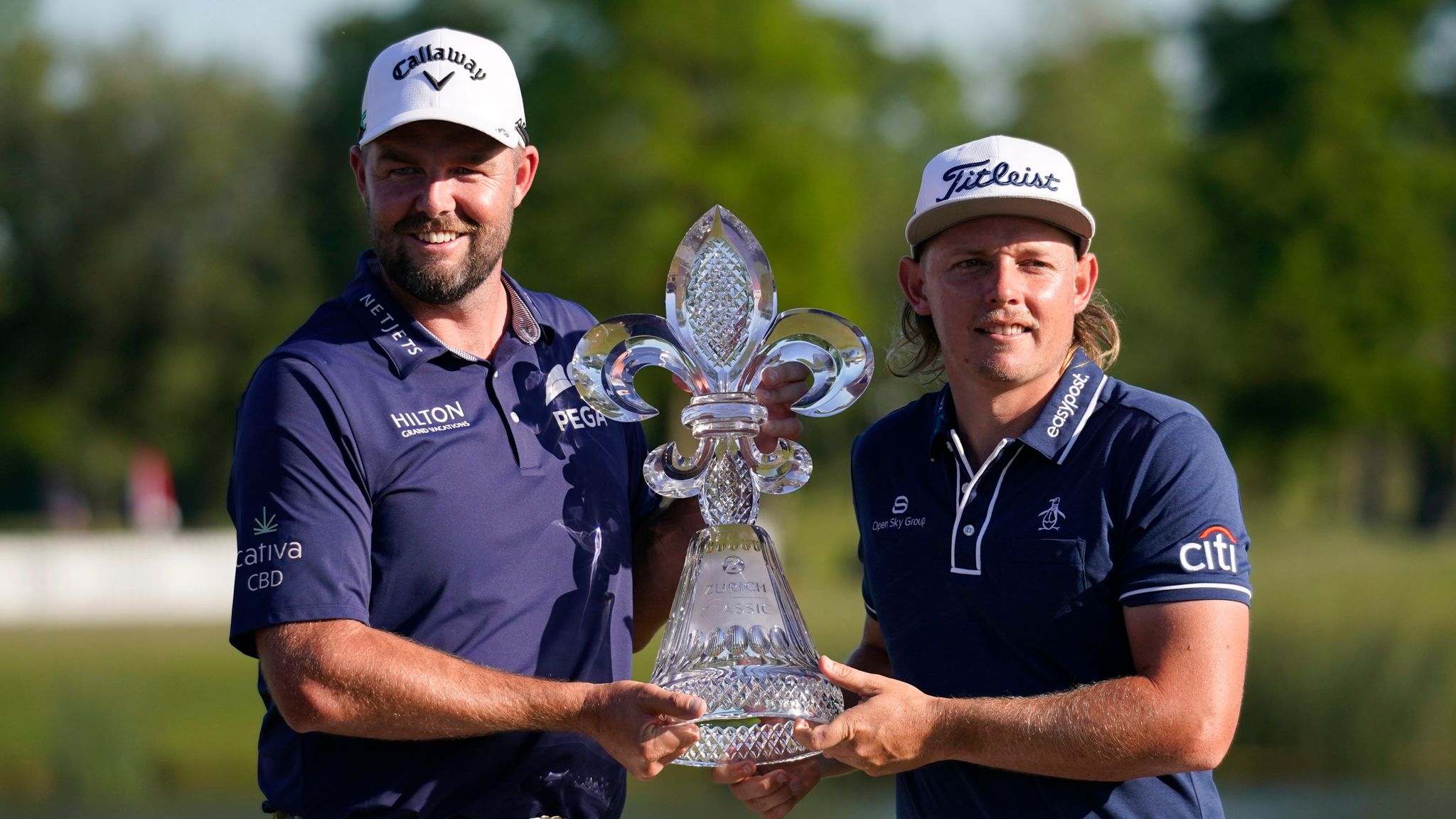 Marc Leishman and Cameron Smith of Australia survived a near-calamity on the 16th hole and came out as winners on the 19th.

Smith sank a seven-foot par putt on the first playoff hole to turn back major champions Louis Oosthuizen and Charl Schwartzel of South Africa to win the Zurich Classic of New Orleans at TPC Louisiana in Avondale, La.

Oosthuizen, who won the 2010 Open Championship at St. Andrews, hit his tee shot into the water on the extra hole and the South Africans finished with a double-bogey 7.

“As soon as Louie hit his drive into the water, we were always going to lay up (on the par-5 hole),” said Smith (pictured right), who claimed his third PGA Tour victory, all in playoffs. “It was nice to hit three good shots to get the win.

“It was a pretty cool week and we really played some good golf. It was really tough coming in on the back nine, but we hung in there and got it done.”

Leishman (left) and Smith posted a 2-under-par 70 in the alternate-shot format of the final round, while 54-hole leaders Schwartzel and Oosthuizen had a 71, as both teams recorded a total score of 20-under 268.

The biggest shot of the match, other than Oosthuizen’s wayward drive to open the playoff, came after Smith hit is drive on the 302-yard 16th hole into the water to the left of the green.

Leishman took a drop in the fringe left of the hole and chipped in from 32 feet for a birdie to win the hole and square the match, before both teams finished with a bogey on the 17th hole and a par on the last to finish regulation play.

“I wasn’t walking up there thinking I wanted to jab him in the ribs or anything, I was just concentrating on the next shot,” said Leishman, who won for the sixth time on the PGA Tour. “I was lucky to take my drop on an upslope for the next shot. I was trying to make it and I did. It was fun doing that.

“Cam didn’t hit a bad shot there. In fact it might sound silly, but he hit a really good shot and it just got caught on the wind.

“ … It’s not often you can celebrate winning with a friend and fellow player. It’s a special win.”

Oosthuizen and Schwartzel birdied two of the first four holes and led much of the final round, by two strokes at one stage, but made only one more birdie, at No. 15, and had bogeys on the 10th and 17th holes.

Schwartzel missed a 20-foot birdie putt on the final hole and they went to the playoff when Leishman missed his birdie try from 16 feet.

“I thought we played great,” said Schwartzel, the 2011 Masters champion. “We had a lot of birdie opportunities that didn’t pan out, and on another day some of those go in and we win.”

Said Oosthuizen: “I felt we played good golf in regulation, but just didn’t make enough birdies. I guess it was just not meant to be.”

Peter Uihlein and Richy Werenski birdied two of the last four holes to close with a 67 and finished one stroke back in third, while Keegan Bradley and Brendan Steele of Idyllwild and UC Riverside shot 70 to tie for fourth with Billy Horschel and Sam Burns, and Brandt Snedeker and Keith Mitchell, both of those teams winding up at 69.

Horschel claimed the 2018 Zurich title with Scott Piercy and won it on his own in 2013 before it became a team event.

Defending champions Ryan Palmer and third-ranked Jon Rahm of Spain birdied the final hole for a 70 that left them three shots back in seventh, while Danny Willett and eighth-ranked Tyrrell Hatton of England took a double-bogey 7 on the last hole to cap a 69 and wound up four down in a tie for eighth with Thomas Pieters of Belgium and Tom Lewis of England, who wound up at 72 with three late birdies, and Bubba Watson and Scottie Scheffler, who birdied No. 18 for a 73.

Fifth-ranked Xander Schauffele of Torrey Pines and San Diego State and 10th-ranked Patrick Cantlay of Los Alamitos and UCLA collected eight birdies in a 67 to tie for 11th.