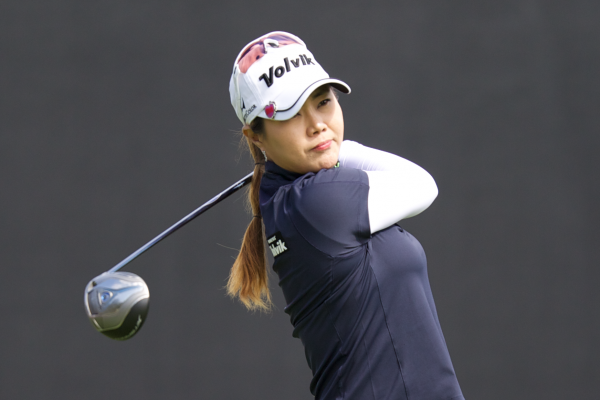 Meena Lee of South Korea eagled her first hole of the day to kick-start a 7-under-par 64 that tied Caroline Masson of Germany for the lead midway through the North Texas LPGA Shootout at Las Colinas Country Club in Irving, Texas.

One day after making a double-bogey 6 on her first hole of the day, Lee started on the back nine and holed her eagle putt before adding eight birdies, including three in a row on both nines.

“My tee shot on No. 1 (Thursday) was bad,” said the 32-year-old Lee, who has won twice on the LPGA Tour, but not since the 2006 LPGA Corning Classic. “This time, I hit the fairway, hit a good six-iron and made the putt, so it was a big difference today.

“Making an eagle on the first hole gave me a good start, and my putting was really good today, especially inside 10 feet.”

Masson, whose only pro victory came in the 2012 South African Women’s Open, carded five birdies and a single bogey at No. 8 in her second straight 67.

Stacy Lewis, who finished second to 17-year-old Lydia Ko of New Zealand last week in the Swinging Skirts LPGA Classic in San Francisco, recorded a bogey-free 64 to match Lee for the low score of the day and was one shot back in a tie for third with Natalie Gulbis, who collected eight birdies in a round of 65.

Christina Kim of San Jose posted a 69 and was another stroke back in fifth, while Dewi Claire Schreefel of the Netherlands and USC shot 66 and was tied for sixth with first-round leader Suzann Pettersen, who recorded a 71, Cristie Kerr, who had a 70, Julieta Granada of Paraguay, who totaled 66, and Dori Carter, who came in at 70.

Michelle Wie, who won two weeks ago at home in Hawaii and started with a 67 in Texas, struggled to a 73 and slid to a tie for 22nd.