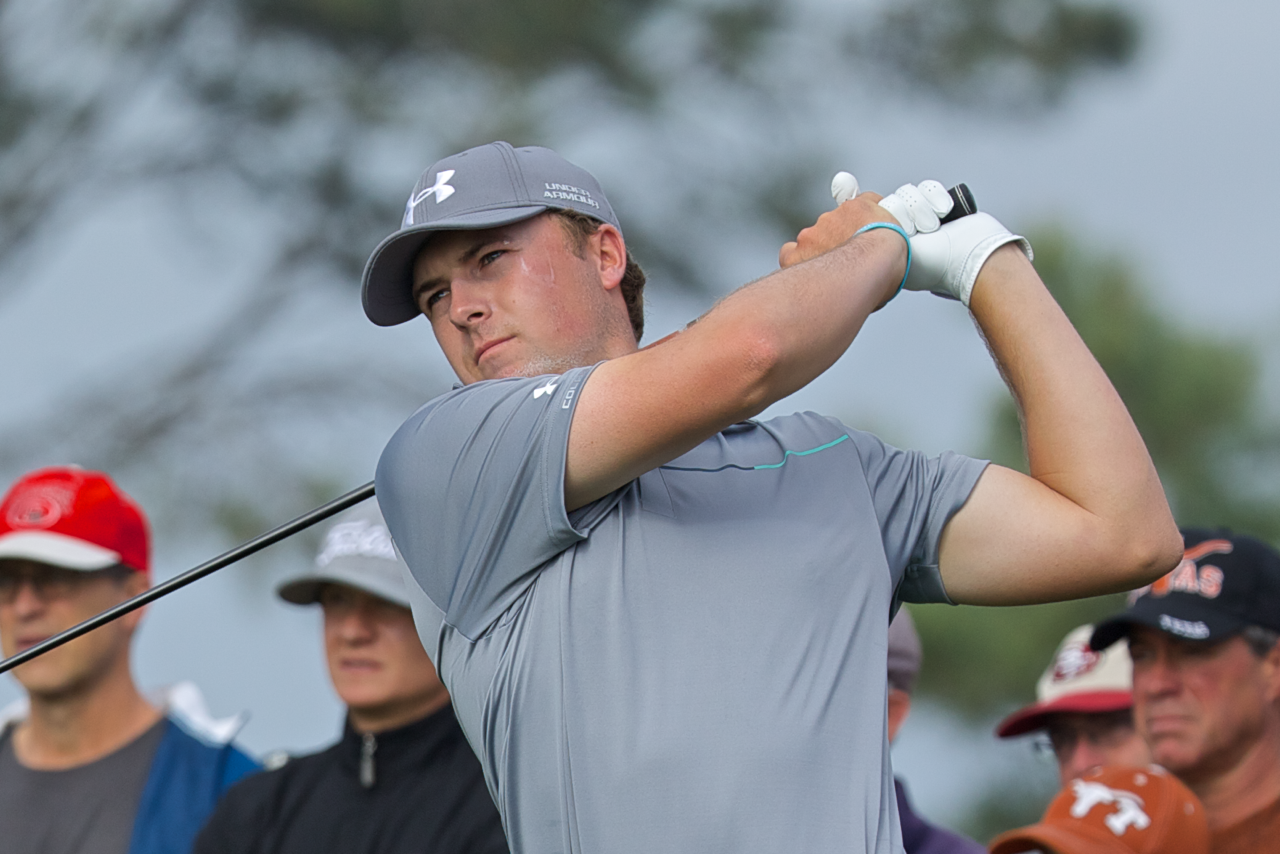 Jordan Spieth has one of the most reliable and powerful golf swings in the game today. He and his coach (Dallas-based Australian native) Cameron McCormick have honed his athletic talents into an efficient move that has helped take the 21-year-old into the top 10 in the World Golf Rankings. Click on any of the images above to see a larger version. 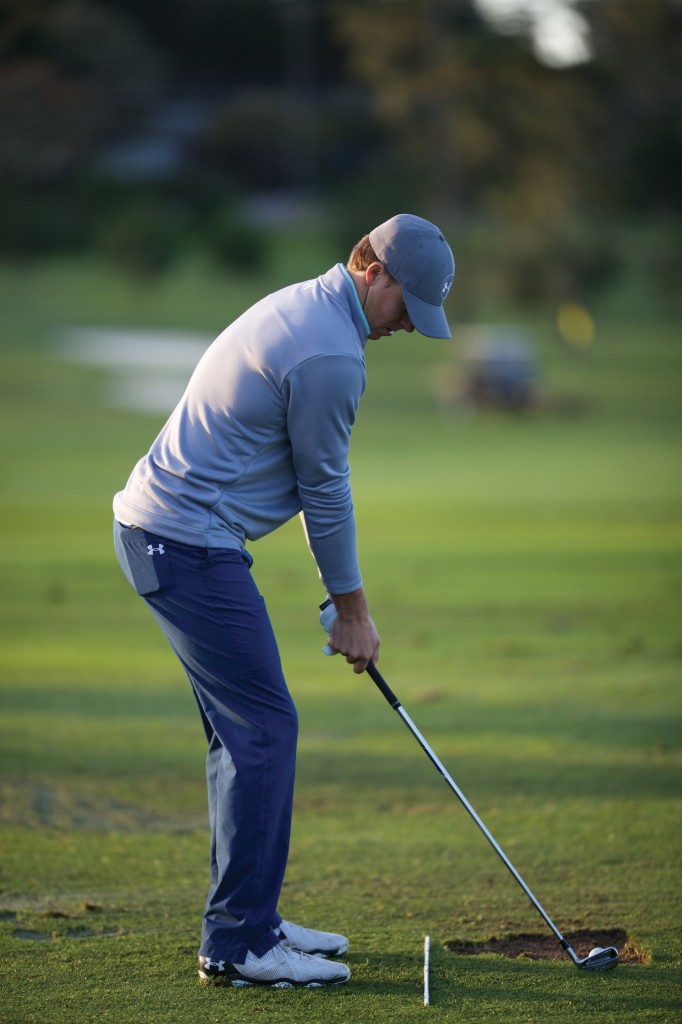 1. SET UP:  Jordan has excellent posture and weight distribution. This allows him to maintain his height through the swing and stay balanced from start to finish. He sets up with his legs and feet slightly open but his shoulders stay parallel to the target line and his hands and arms hang relaxed below his shoulders. 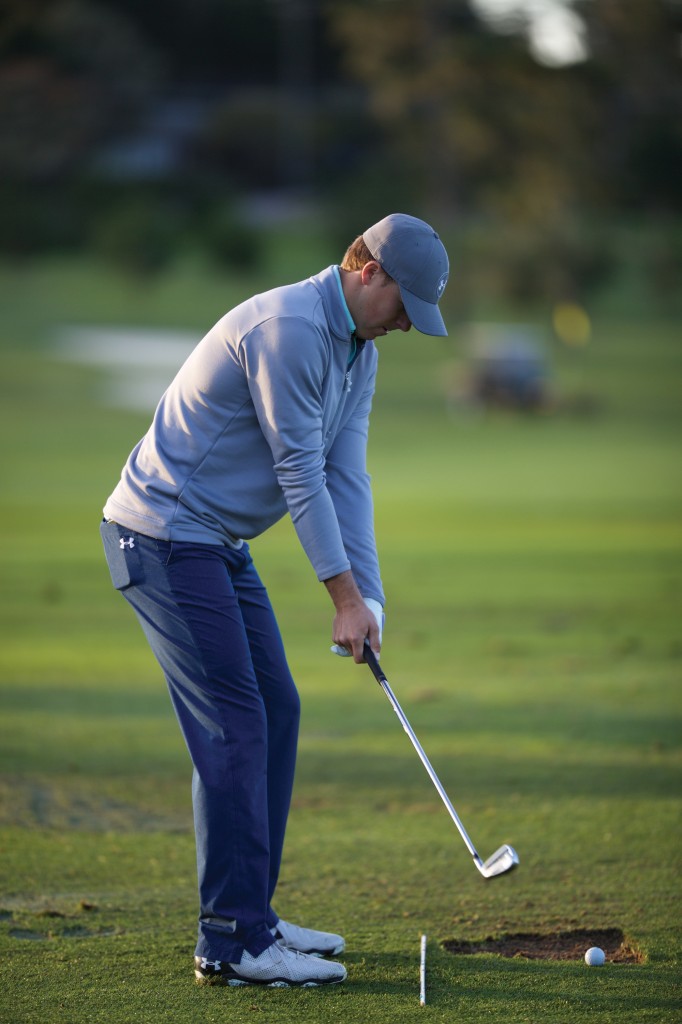 2. FIRST MOVE: Jordan slightly rotates his lower body, stomach, and shoulders while allowing his arms to swing comfortably away from the target without manipulating the club face. Notice the square club face and right elbow extension away from his body. 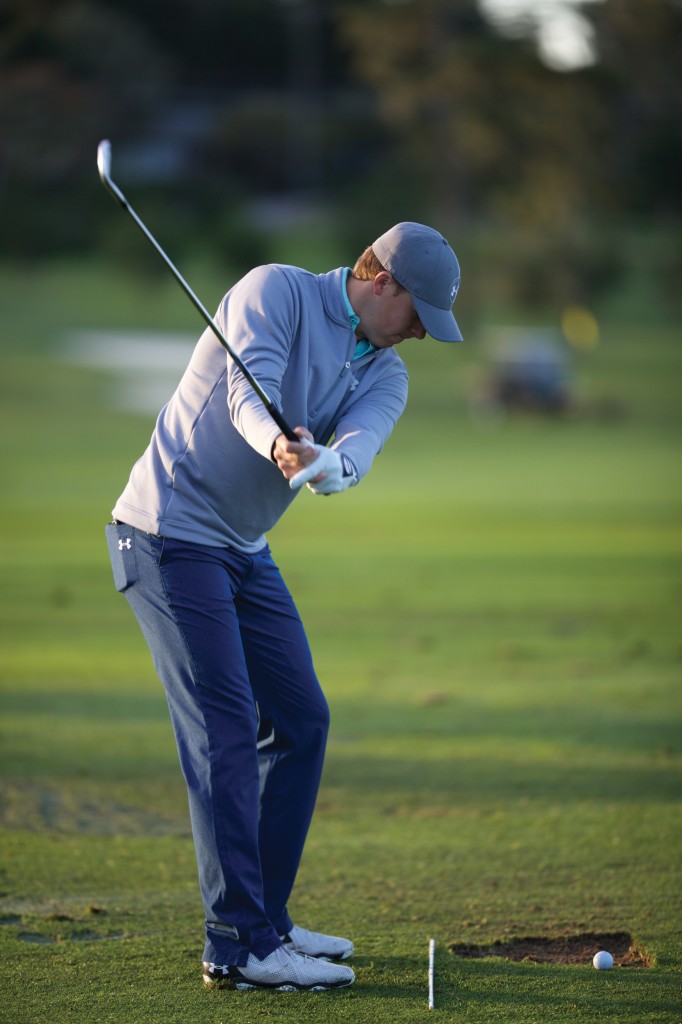 3. HALFWAY BACK: His stomach and shoulders continue to turn into his “athletic” right leg while his right elbow continues to extend away and hands start to set the club. Notice his hands are in front of his chest while the club shaft stayed in-between his forearms. 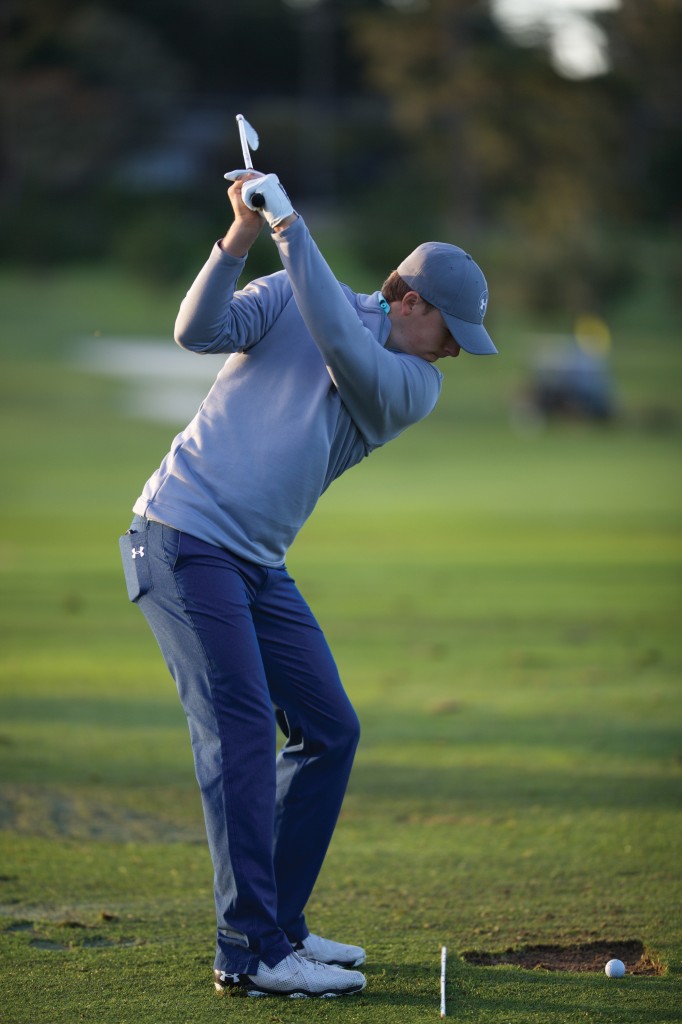 4. THE TOP:  Jordan’s left shoulder is now underneath his chin and stomach rotation has completed the coil into his athletic right leg. His elbows stay together and shaft is parallel to the target line. He also has his club face at the same angle as the back of his left wrist and arm. 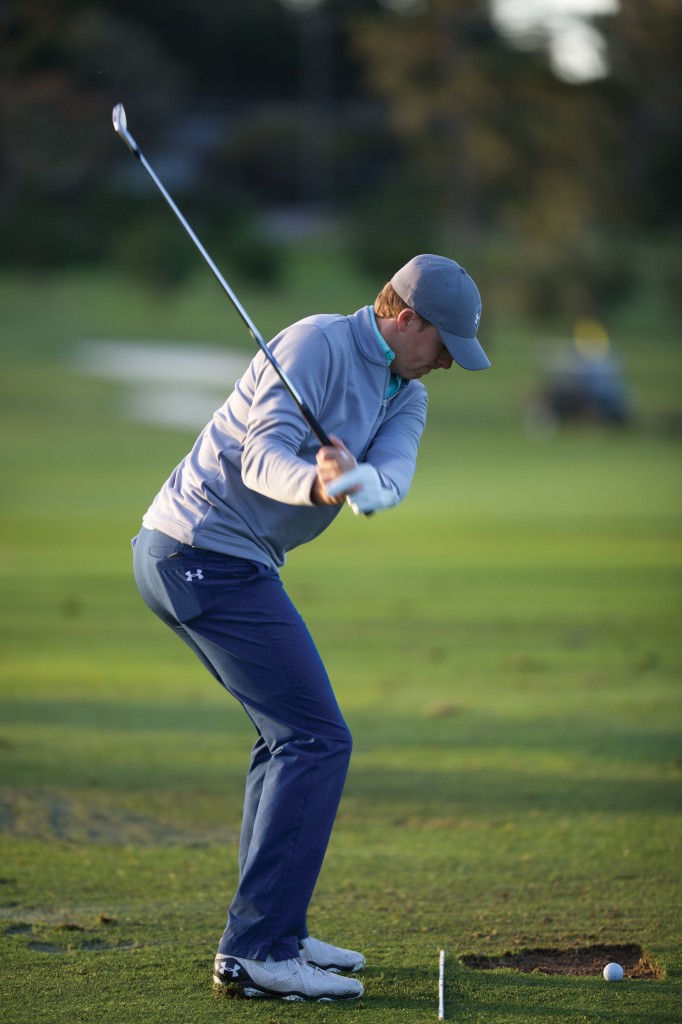 5. THE MOVE DOWN:  Jordan shifts his weight toward the target and secures balance on both legs as he rotates his hips. His left shoulder and chest are still facing the ball, which allows him to generate a large amount of torque in his midsection and legs. This promotes distance. Also, notice that his elbows stay close together and his shaft is pointing at the ball and stays in between his forearms. 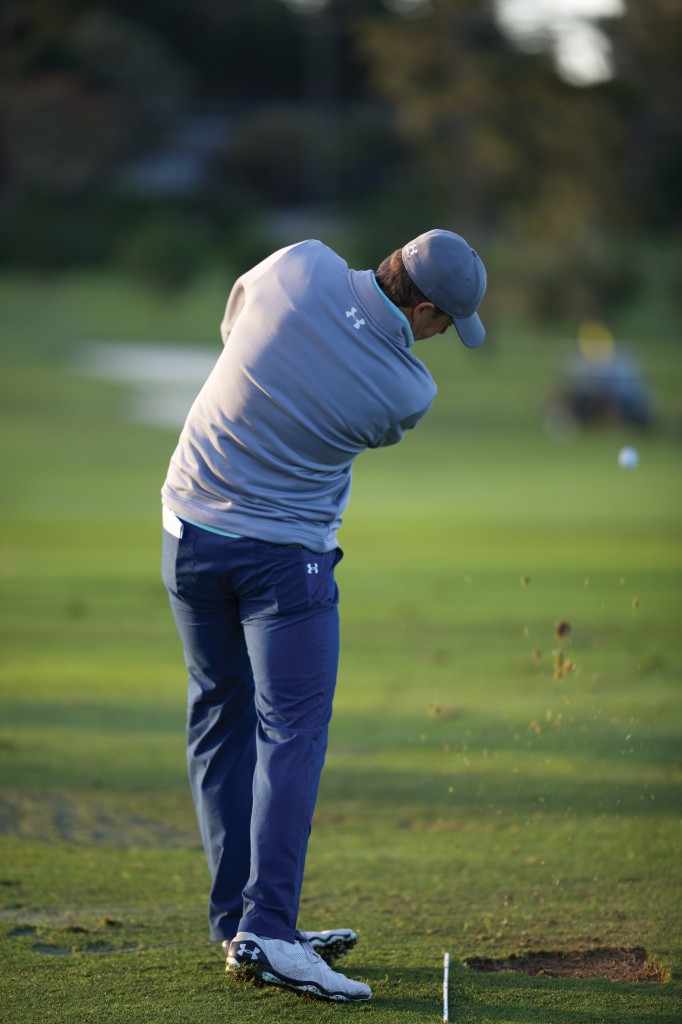 6. RELEASE:  Jordan shifts all of his weight to his front foot and rotates his hips while keeping his right heel low through impact. His head is facing down as his left shoulder rotates up to maintain his posture through impact. 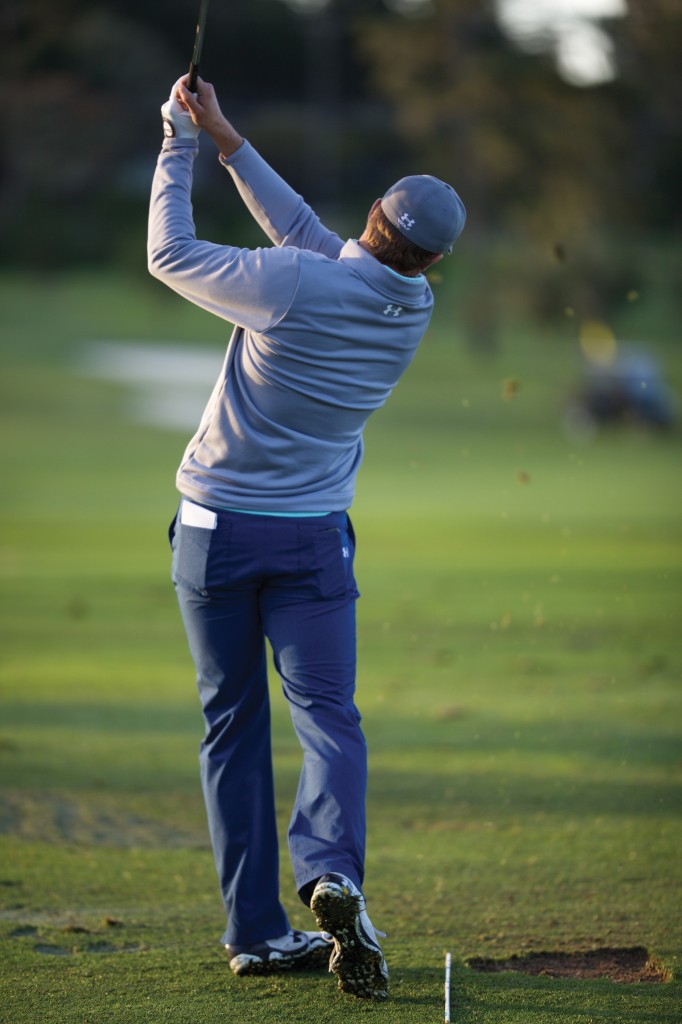 7. COMPLETING THE SWING:  Although his weight has rolled to the outside of his left foot, Jordan manages to maintain perfect balance by using the centrifugal force of the club to swing his body into a position that will allow his eyes and head to naturally follow the ball while maintaining his posture.