Korda leads in Bahamas after 66 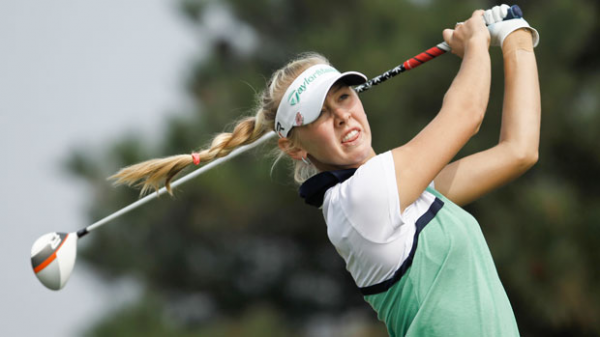 Jessica Korda birdied four of the last seven holes to card a 7-under-par 66 and take a one-stroke lead over Paula Creamer after two rounds of the Pure Silk-Bahamas LPGA Classic in breezy conditions at Ocean Club Golf Course on Paradise Island in the Bahamas.

The 20-year-old Korda, whose only professional victory came in the 2012 Women’s Australian Open, has recorded 15 birdies over the first two rounds of the 2014 LPGA Tour opener.

“I stayed calm out there, and me and my caddie had a lot of fun,” said Korda, daughter of former Czech tennis star Petr Korda. “I made a lot of putts, which really helps out there.

“(The weekend) depends on if it’s still windy. You have to keep the ball in play and give yourself as many opportunities as you can. If it calms down a little like (Thursday), the golf course plays great. There definitely are some holes you can go for and others you have to play back on. I love it. It’s a great test of golf.”

Creamer, who has won nine times on the LPGA Tour but not since the 2010 U.S. Women’s Open, made a double-bogey 6 on the first hole but followed with four consecutive birdies and had 10 in all while posting a 65.

Michelle Wie birdied four of her last six holes, and had eight birdies overall to record a bogey-free 65, and was two shots back in a tie for third with Jenny Suh, who shot 66.

First-round leader Lydia Ko of New Zealand followed her opening 68 with a 70 and was another stroke back in a tie for fifth with Christel Boeljon of the Netherlands, who had a 67, Na Yeon Choi of South Korea, who posted a 68, and P.K. Kongkraphan of Thailand, who came in at 69.