Kim Beats Cantlay by 1 in AmEx 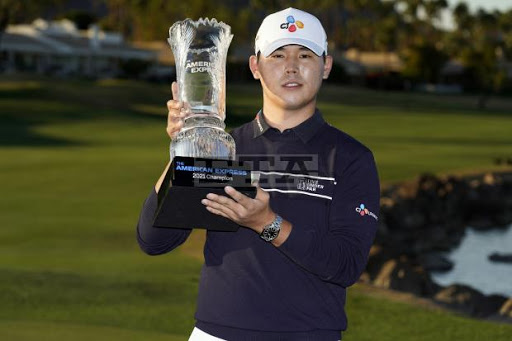 Si Woo Kim of South Korea finally backed up his victory in the 2017 Players Championship.

The 25-year-old Kim sank a tie-breaking, 19-foot birdie putt on the 17th hole en route to a bogey-free, 8-under-par 64 to beat Patrick Cantlay by one stroke in The American Express on the Stadium Course at PGA West in La Quinta.

“My heart was very, very firm the last five holes,” said Kim, who also won the 2016 Wyndham Championship. “I was looking at the scoreboard and saw that Patrick kept making birdies, but I just stayed patient and made a birdie at 16 (to pull even with Cantlay).

“I had a chance to win twice in each of the last three years, but didn’t, and I couldn’t sleep last night. This means a lot to me and I’m very happy. I’ve got a lot more confidence after this tournament.”

Kim, who had a share of the 54-hole lead, collected four birdies on each nine and finished with a score of 23-under 265.

The 10th-ranked Cantlay, from Los Alamitos and UCLA, took the lead with a 38-foot birdie putt on the final hole to cap a flawless 61 and had to wait well more than an hour to learn he wouldn’t even be in a playoff.

“That’s as good as I can play,” said Cantlay, who captured the 2020 Zozo Championship for his third PGA Tour victory. “I thought I would have a chance at a playoff. I played unbelievable this weekend. I did everything I could. Just going to be a shot short.”

Cameron Davis of Australia made six birdies on the front nine in a 64 and was three shots back in solo third, while Tony Finau, who also entered the final round with a share of the lead, was one more back in fourth after a 68 that included four birdies in the first 10 holes but only two more.

Abraham Ancer of Mexico made a 29-foot eagle putt on the eighth hole and birdied the last three for a 66 to wind up eight behind in a tie for fifth with Michael Thompson, who had six birdies on the front nine in another 66, and Doug Ghim, who finished at 69.

Byeong Hun An, who was one shot back after an opening 65, closed with a 69 and was nine strokes behind in a tie for eighth with Paul Casey of England, who also had a 69, Francesco Molinari of Italy, who totaled 70, and Brian Harman, who came in at 71.

Defending champion Andrew Landry tied for 62nd after struggling to a second straight 74.