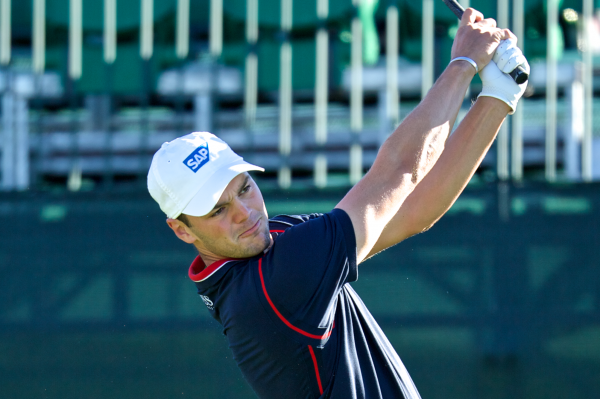 Martin Kaymer of Germany birdied three of his last five holes to shoot 5-under-par 65 and take a three-shot lead over Graeme McDowell of Northern Ireland, Kevin Na, Brendon De Jonge of South Africa and Fran Quinn after the first round of the 114th U.S. Open at Pinehurst No. 2 in Pinehurst, N.C.

Kaymer, who won the 2010 PGA Championship at Whistling Straits in a playoff over Bubba Watson, carded his only bogey at No. 7 and played the back nine in 4-under 31.

“It was more playable than I thought,” said Kaymer, the reigning Players champion, who told reporters a day earlier that 8-over might win the tournament. “I think that made a big difference mentally, that you feel like there are actually some birdies out there, not only bogeys.

“I said plus 8 because the way the golf course played on Monday, Tuesday, Wednesday. But obviously, they softened the conditions a little bit, so it was more playable. So hopefully, I’m not right with the plus 8. I would be disappointed.”

McDowell, who won the 2010 U.S. Open at Pebble Beach, had 15 pars, one birdie, one bogey and an eagle on the fifth hole in his 68, while Na recorded three birdies and also had an eagle at No. 5.

The 49-year-old Quinn, who last played in the U.S. Open in 1996 at Oakland Hills, made the last of his four birdies while finishing at No. 9, while De Jonge made bogeys on the first two holes but none the rest of the way and picked up four birdies.

Brandt Snedeker, who missed a five-foot birdie putt on the ninth hole that would have gotten him to 5-under, finished with a 69 and was in a tie for sixth that included Henrik Stenson, Matt Kuchar, Dustin Johnson, Jordan Spieth, Keegan Bradley and Hideki Matsuyama of Japan.

Phil Mickelson, trying to complete the Career Grand Slam, was 2-under through 14 holes before making two bogeys down the stretch and was tied for 16th at 70, and defending champion Justin Rose of England was tied for 50th at 72.